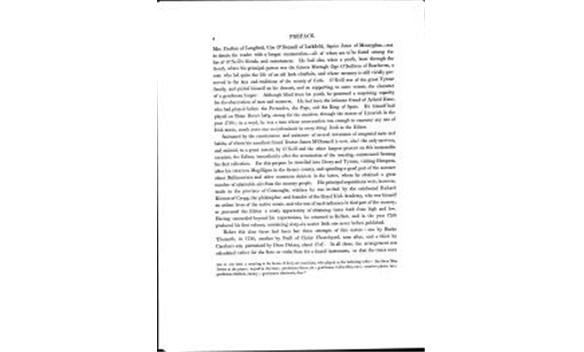 Previous | Next
Bunting - The Ancient Music of Ireland, Volume 1, Issue 1, Page 10
51 views
Favourite | Share | Feedback
periodical Publisher
Hodges & Smith, Dublin, 1840
periodical Editor
Edward Bunting
periodical Title
Bunting - The Ancient Music of Ireland
volume Number
1
issue Content
4 PREFACE.Mrs. Crofton of Longford, Con ODonnell of Larkfield, Squire Jones of Moneyglassnotto detain the reader with a longer enumerationall of whom are toThe found among thelist of ONeills friends and entertainers, He had also, when a youth, been through theSouth, where his principal patron was the famous Murtagh Oge OSullivan of Bearhaven, aman who led quite the life of an old Irish chieftain, and whose memory is still vividly pre-served in the lays and traditions of the county of Cork. ONeill was of the great Tyronefamily, and. prided himself on his descent, and on supporting, to some extent, the characterof a gentleman harper. Although blind from his youth, he possessed a surprising capacityfor the observation of men and manners. He had been the intimate friend of Acland Kane,who had, played before the Pretender, the Pope, and the King of Spain. He himself had.played on Brian Borus h trp, strung for the occasion, through the streets of Limerick in theyear 1760; in a word, he was a man whose conversation was enough to clamour any ne fIrish music, much more one so enthusiastic in evel:?, thing Irish as the Editor.Animated by the countenance and assistance of several townsmen of congenial taste andhabits, of whom his excellent friend Doctor James MDonnefl is now, alas! the only survivor,and assisted, to a great extent, by ONeill and. the other harpers present on this memorableoccasion, the Editor, iirnncdiately after the termination of the meeting, commenced forminghis first collection. For this purpose he travelled into Derry and Tyrone, visiting Hempson ,after his return to Magilligan in the former county, and spending a good part of the summerabout Ballinascreen and other mountain districts in the latter, where he obtained a greatnumber of admirable airs from the country people. His principal acquisitions were, however,made in the province of Connaught, whither he was invited by the celebrated RichardKirwan of Cregg, the philosopher, and founder of the Royal Irish Academy, who was himselfan ardent lover of the native music, and who was of such influence in that part of the country,as procured the Editor a ready opportunity of obtaining tunes both from high and low.Having succeeded beyond his expectations, he returned to Belfast, and in the year 1796produced his first volume, containing sixty-six native Irish airs never before published.Before this time there had been but three attempts of this nature : one by BurkeThumoth, in 1720, another by Neill of Christ Churchyard, soon after, and a third byCarolans son, patronized by Dean Deiany, about 1747. In all these, the arrangement wascalculated. rather for the flute or violin than for a keyed instrument, so that the tunes werewas at one time a meeting in his house of forty-six musicians, who played in the following order the three MissIrwins at the piano; myself at the harp; gentlemen flutes, six; gentlemen violiucellos, two; common pipers, tengentlemen fi4dlers, twenty ; gentlemen clarionets, four.
issue Number
1
page Number
10
periodical Author
Edward Bunting
issue Publication Date
1840-01-01T00:00:00
allowedRoles
anonymous,guest,friend,member