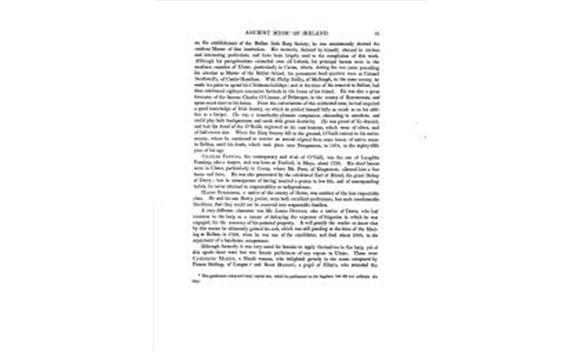 Previous | Next
Bunting - The Ancient Music of Ireland, Volume 1, Issue 1, Page 93
7 views
Favourite | Share | Feedback
periodical Publisher
Hodges & Smith, Dublin, 1840
periodical Editor
Edward Bunting
periodical Title
Bunting - The Ancient Music of Ireland
volume Number
1
issue Content
ANCIENT MUSIC OF IRELAND. 81on the establishment of the Belfast Irish Harp Society, he was unanimously elected theresident Master of that institution. His memoirs, dictated by himself, abound. in curiousand interesting particulars, and have been largely used in the compilation of this work.Although his peregrinations extended over all Ireland, his principal haunts were in thesouthern counties of Ulster, particularly in Cavan, where, during the ten years precedinghis election as Master of the Belfast School, his permanent head quarters were at ColonelSouthwells, of Castle-Hamilton. With Philip Reilly, of Mullough, in the same county, hemade it a point to spend his Christmas holidays; and at the time of his removal to Belfast, hadthus celebrated eighteen successive festivals in the house of his friend. He was also a greatfavourite of the famous Charles OConnor, of Belanagar, in the county of Roscommon, andspent much time in his house. From the conversation of this celebrated man, he had acquireda good knowledge of Irish history, on which he prided himself fully as much as on his abili-ties as a harper. He was a remarkably pleasant companion, abounding in anecdote, andcould play both backgammon and cards with great dexterity. He was proud of his descent,and had tbe hand of the ONeills engraved on his coat buttons, which were of silver, andof half-crown size. lvVhen the Harp Society fell to the ground, ONeill retired to his nativecounty, where he continued to receive an annual stipend from some lovers of native musicin Belfast, until his death, which took place near Dungannon, in 1818, in the eighty-fifthyear of his age.CHARLES FANNING, the cotemporary and rival of ONeill, was the son of LoughlinFanning, also a harper, and was born at Foxford, in Mayo, about 1736. His chief hauntswere in Ulster, particularly in Cavan, where Mr. Pratt, of Kingscourt, allowed him a freehouse and farm. He was also patronized by the celebrated Earl of Bristol, the great Bishopof Derry; but in consequence of having married a person in low life, and of correspondinghabits, he never attained to respectability or independence.HARRY FrrzslMox, a native of the county of Down, was another of the less respectableclass. He and his son Harry, junior, were both excellent performers, but such irreclaimablelibertines, that they could not be received into respectable families.A very different character was Mr. JAMES DUNCAN, also a native of Down, who hadrecourse to the harp as a means of defraying the expenses of litigation in which he wasengaged, for the recovery of his paternal property. It will gratify the reader to know thatby this means he ultimately gained his suit which was still pending at the time of the Meet-ing at Belfast, in 1792, when he was one of the candidates, and died about 1800, in theenjoyment of a handsome competence.Although formerly it was very usual for females to apply themselves to the harp, yet atthis epoch there were but two female performers of any repute in Ulster. These wereCATHERINE MARTIN, a Meath woman, who delighted greatly in the tunes composed byParson Stirling, of Lurgan ;a and ROSE MOONEY, a pupil of Elliots, who attended the* This gentleman composed many capital airs, which he performed on the bagpipes, but did not cultivate theharp.
issue Number
1
page Number
93
periodical Author
Edward Bunting
issue Publication Date
1840-01-01T00:00:00
allowedRoles
anonymous,guest,friend,member