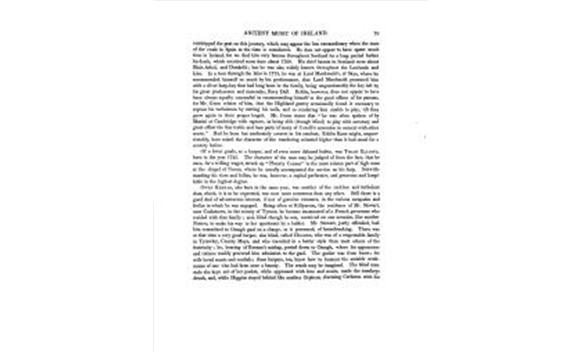 Previous | Next
Bunting - The Ancient Music of Ireland, Volume 1, Issue 1, Page 91
6 views
Favourite | Share | Feedback
periodical Publisher
Hodges & Smith, Dublin, 1840
periodical Editor
Edward Bunting
periodical Title
Bunting - The Ancient Music of Ireland
volume Number
1
issue Content
ANCIENT MUSIC OF IRELAND. 79outstripped the post on this journey, which may appear the less extraordinary when the stateof the roads in Spain at the time is considered. He does not appear to have spent muchtime in Ireland, for we find him very famous throughout Scotland for a long period beforehis death, which occurred some time about 1790. His chief haunts in Scotland were aboutBlair-Athol, and Dunkeld; but he was also widely known throughout the Lowlands andIsles. In a tour through the Isles in 1775, he was at Lord Macdonalds, of Skye, where herecommended himself so much by his performance, that Lord Macdonald presented himwith a silver harp-key that had long been in the family, being unquestionably the key left byhis great predecessor and namesake, Rory Dall. Echlin, however, does not appear to havebeen always equally successful in recommending himself to the good offices of his patrons,for Mr. Gunn relates of him, that the Highland gentry occasionally found it necessary torepress his turbulence by cutting his nails, and so rendering him unable to play, till theygrew again to their proper length. Mr. Gunn states that he was often spoken of byManini at Cambridge with rapture, as being able (though blind) to play with accuracy andgreat effeet the fine treble and bass parts of many of Corellis correntos in concert with othermusic. Had lie been but moderately correct in his conduct, Echlin Kane might, unques-tionably, have raised the character of the wandering minstrel higher than it had stood for acentury before.Of a lower grade, as a harper, and of even more debased habits, was THADY ELLiOTT,born in the year 1725. The character of the man may be judged of from the fact, that heonce, for a trifling wager, struck up Planxty Connor in the most solemn part of high massat the chapel of Navan, where he usually accompanied the service on his harp. Notwith-standing his vices and follies, lie was, however, a capital performer, and generous and hospi-table in the highest degree.OWEN KEENAN, also born in the same year, was another of the reckless and turbulentclass, which, it is to be regretted, was now more numerous than any other. Still there is agood deal of adventurous interest, if not of genuine romance, in the various escapades andfrolics in which he was engaged. Being often at Killymoon, the residence of Mr. Stewart,near Cookstown, in the county of Tyrone, he became enamoured of a French governess whoresided with that family; and, blind though he was, contrived on one occasion, like anotherRomeo, to make his way to her apartment by a ladder. Mr. Stewart, justly offended, hadhim committed to Omagh gaol on a charge, as is presumed, of housebreaking. There wasat that time a very good harper, also blind, called HIGGINS, who was of a respectable familyin Tyrawley, County Mayo, and who travelled in a better style than most others of thefraternity; he, hearing of Keenans mishap, posted down to Omagh, where his appearanceand retinue readily procured him admission to the gaol. The gaoler was from home; hiswife loved music and cordials; these harpers, too, knew how to humour the amiable weak-nesses of one who had been once a beauty. The result may be imagined. The blind menstole the keys out of her pocket, while oppressed with love and music, made the turnkeysdrunk, and, while Higgins stayed behind like another Orpheus, charming Cerberus with his
issue Number
1
page Number
91
periodical Author
Edward Bunting
issue Publication Date
1840-01-01T00:00:00
allowedRoles
anonymous,guest,friend,member