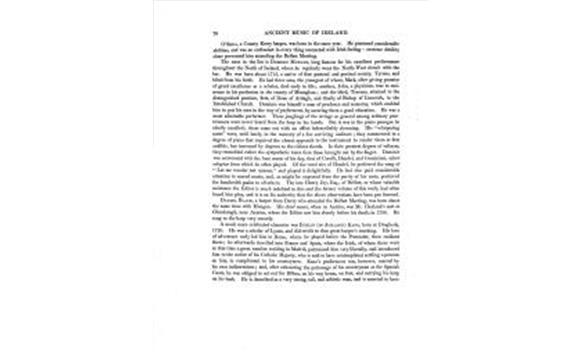 Previous | Next
Bunting - The Ancient Music of Ireland, Volume 1, Issue 1, Page 90
6 views
Favourite | Share | Feedback
periodical Publisher
Hodges & Smith, Dublin, 1840
periodical Editor
Edward Bunting
periodical Title
Bunting - The Ancient Music of Ireland
volume Number
1
issue Content
78 ANCIENT MUSIC OF IRELAND.OSHEA, a County Kerry harper, was born in the same year. He possessed considerableabilities, and was an enthusiast in every thing connected with Irish feeling: extreme debilityalone prevented him attending the Belfast Meeting.The next in the list is DOMINIC MTJNGAN, long famous for his excellent performancethroughout the North of Ireland, where he regularly went the North-West circuit with thebar. He was born about 1715, a native of that pastoral and poetical county, Tyrone, andblind from his birth. He had three sons, the youngest of whom, Mark, after giving promiseof great excellence as a scholar, died early in life; another, John, a physician, rose to emi-nence in his profession in the county of Monaghan; and the third, Terence, attained to thedistinguished position, first, of Dean of Arciagh, and finally of Bishop of Limerick, in theEstablished Churh. Dominic was himself a man of prudence and economy, which enabledhim to put his sons in the way of preferment, by securing them a good education. He was amost admirable performer. Those janglings of the strings so general among ordinary prac-titioners were never heard from the harp in his hands. But it was in the piano passages hechiefly excelled; these came out with an effect indescribably charming. His whisperingnotes were, until lately, in the memory of a few surviving auditors ; they commenced in adegree of piano that required the closest approach to the instrument to render them at firstaudible, but increased by degrees to the richest chords. In their greatest degree of softness,they resembled rather the sympathetic tones than those brought out by the finger. Dominicwas conversant with the best music of his day, that of Corelli, Handel, and Geminiani, selectadagios from which he often played. Of the vocal airs of Handel, he preferred the song ofLet me wander not unseen, and played it delightfully. He had also paid considerableattention to sacred music, and, as might be expected from the purity of his taste, preferredthe hundredth psalm to all others. The late Henry Joy, Esq., of Belfast, to whose valuableassistance the Editor is much indebted in this and the former volume of this work, had oftenheard him play, and it is on his authority that the above observations have been put forward.DANIEL BLACK, .a harper from Derry who attended the Belfast Meeting, was born aboutthe same time with Mungan. His chief resort, when in Antriin, was Mr. Heylands seat atGlendaragh, near Antrim, where the Editor saw him shortly before his death, in 1796. Hesung to the harp very sweetly.A much more celebrated character was ECHLIN (or ACKLAND) KANE, born at Drogheda,1720. He was a scholar of Lyons, and did credit to that great harpers teaching. His loveof adventure early led him to Rome, where he played before the Pretender, then residentthere; he afterwards travelled into France and Spain, where the Irish, of whom there wereat that time a great number residing in Madrid, patronized him very liberally, and introducedhim to the notice of his Catholic Majesty, who is said to have contemplated settling a pensionon him, in compliment to his countrymen. Kanes preferment was, however, marred byhis own indiscretions; and, after exhausting the patronage of his countrymen at the SpanishCourt, he was obliged to set out for Bilboa, on his way home, on foot, and carrying his harpon his back. He is described as a very strong, tall, and athletic man, and is asserted to have
issue Number
1
page Number
90
periodical Author
Edward Bunting
issue Publication Date
1840-01-01T00:00:00
allowedRoles
anonymous,guest,friend,member