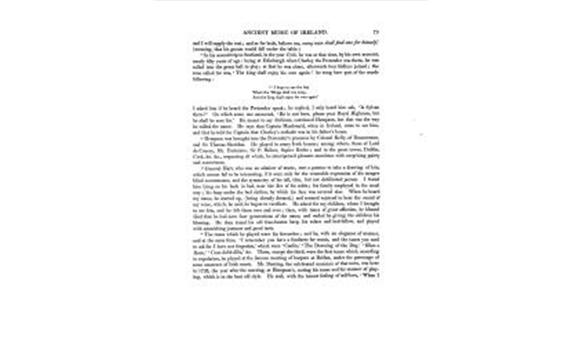 Previous | Next
Bunting - The Ancient Music of Ireland, Volume 1, Issue 1, Page 87
6 views
Favourite | Share | Feedback
periodical Publisher
Hodges & Smith, Dublin, 1840
periodical Editor
Edward Bunting
periodical Title
Bunting - The Ancient Music of Ireland
volume Number
1
issue Content
ANCIENT MUSIC OF IRELAND. 75and I will supply the rest; and as for beds, believe me, every ma shall find one for himself,(meaning, that his guests would fall under the table.)In his second trip to Scotland, in the year 1745, he was at that time, by his own account,nearly fifty years of age: being at Edinburgh when Charley the Pretender was there, he wascalled into the great hail to play; at first he was alone, afterwards four fiddlers joined; thetune called for was, The king shall enjoy his own again: he sung here part of the wordsfollowing:I hope to see the dayWhen the Whigs shall run away,And the king shall enjoy his own again.I asked him if he heard the Pretender speak; he replied, I only heard him ask, Is Sylvanthere? On which some one answered, He is not here, please your Royal Highness, butlie shall be sent for. He meant to say Sullivan, continued Hempson, but that was the wayhe called the name. He says that Captain Macdonald, when in Ireland, caine to see him,and that he told the Captain that Chancys cockade was in his fathers house.Hempson was brought into the Pretenders presence by Colonel Kelly, of Roscommon,and Sir Thomas Sheridan. He played in many Irish houses; among others, those of Lordde Courcy, Mr. Fortescue, Sir P. Bellew, Squire Roche ; and in the great towns, Dublin,Cork, &c. &c., respecting all which, he interspersed pleasant anecdotes with surprising gaietyand correctness.General Hart, who was an admirer of music, sent a painter to take a drawing of him,which cannot fail to be interesting, if it were oniy for the venerable expression of his meagreblind countenance, and the symmetry of his tall, thin, but not debilitated person. I foundhim lying on his back in bed, near the fire of his cabin; his family employed in the usualway; his harp under the bed clothes, by which his face was covered also. When he heardmy name, he started up, (being already dressed,) and seemed rejoiced to hear the sound ofmy voice, which, he said, lie began to recollect. He asked for my children, whom I broughtto see him, and he felt them over and over; then, with tones of great affection, he blessedGod that he had seen four generations of the name, and ended by giving the children hisblessing. He then tuned his old time-beaten harp, his solace and bed-fellow, and playedwith astonishing justness and good taste.The tunes which he played were his favourites; and he, with an elegance of manner,said at the same time, I remember you have a fondness for music, and the tunes you usedto ask for I have not forgotten, which were Coolin, The Dawning of the Day, Ellen aRoon, Cean dubh dilis, &c. These, except the third, were the first tunes which, accordingto regulation, he played at the famous meeting of harpers at Belfast, under the patronage ofsome amateurs of Irish music. Mr. Bunting, the celebrated musician of that town, was herein 1793, the year after the meeting, at Hempsons, noting his tunes and his manner of play-ing, which is in the best old style. He said, with the honest feeling of self-love, When I
issue Number
1
page Number
87
periodical Author
Edward Bunting
issue Publication Date
1840-01-01T00:00:00
allowedRoles
anonymous,guest,friend,member