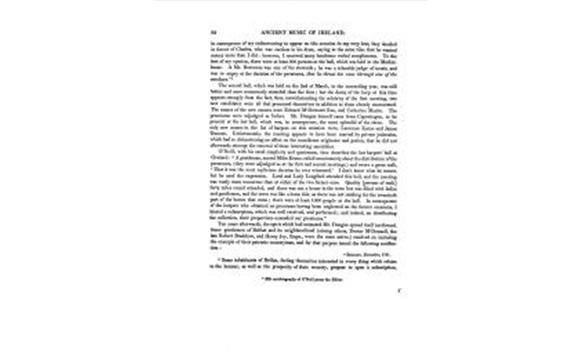 Previous | Next
Bunting - The Ancient Music of Ireland, Volume 1, Issue 1, Page 74
10 views
Favourite | Share | Feedback
periodical Publisher
Hodges & Smith, Dublin, 1840
periodical Editor
Edward Bunting
periodical Title
Bunting - The Ancient Music of Ireland
volume Number
1
issue Content
62 ANCIENT MUSIC O1 IRELAND.in consequence of my endeavouring to appear on this occasion in my very best, they decidedin favour of Charles, who was careless in his dress, saying at the same time that he wantedmoney more than I did: however, I received many handsome verbal compliments. To thebest of my opinion, there were at least 500 persons at the ball, which was held in the Market-house. A Mr. Burrowes was one of the stewards; he was a tolerable judge of music, andwas so angry at the decision of the premiums, that he thrust his cane through one of thewindows. aThe second ball, which was held on the 2nd of March, in the succeeding year, was stillbetter and more numerously attended than the first; but the decay of the harp at this timeappears strongly from the fact, that, notwithstanding the celebrity of the first meeting, twonew candidates were all that presented themselves in addition to those already enumerated.The names Qf the new corners were Edward MDermott Roe, and Catherine Martin. Thepremiums were adjudged as before. Mr. Dungan himself came from Copenhagen, to be.present at the last ball, which was, in consequence, the most splendid of the three. Theonly new names in the list of harpers on this occasion were, Laurence Keane and JamesDuncan. Unfortunately, the meeting appears to have been marred by private jealousies,which had so disheartening an effect on the munificent originator and patron, that he did notafterwards attempt the renewal of these interesting assemblies.ONeill, with his usual simplicity and quaintness, thus describes the last harpers ball atGranard: A gentleman, named Miles Keane, railed uncommonly about the distribution of thepremiums, (they were adjudged as at the first and second meetings,) and swore a great oath,That it was the most nefarious decision he ever witnessed. I dont know what he meant,but he used the expression. Lord and Lady Longford attended this ball, and the meetingwas vastly more numerous than at either of the two former ones. Quality [ persons of rank]forty miles round attended, and there was not a house in the town but was filled with ladiesand gentlemen, and the town was like a horse fair, as there was not stabling for the twentiethpart of the horses that came; there were at least 1000 people at the ball. In consequenceof the harpers who obtained no premiums having been neglected on the former occasions, Ihinted a subscription, which was well received, and performed; and indeed, on distributingthe collection, their proportions exceeded our premiums.Ten years afterwards, the spirit which had animated Mr. Dungan spread itself northward.Some gentlemen of Belfast and its neighbourhood (among others, Doctor MDonnelI, thelate Robert Bradshaw, and Henry Joy, Esqrs., were the most active,) resolved on imitatingthe example of their patriotic countryman, and for that purpose issued the following notifica-tion:BELFAST, December, 1791.Some inhabitants of Belfast, feeling themselves interested in every thing which relatesto the honour, as well as the prosperity of their country, propose to open a subscription,MS. autobiography of ONeill pene. the Editor.
issue Number
1
page Number
74
periodical Author
Edward Bunting
issue Publication Date
1840-01-01T00:00:00
allowedRoles
anonymous,guest,friend,member