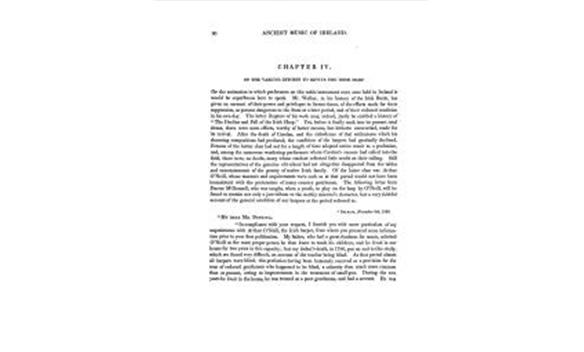 Previous | Next
Bunting - The Ancient Music of Ireland, Volume 1, Issue 1, Page 72
6 views
Favourite | Share | Feedback
periodical Publisher
Hodges & Smith, Dublin, 1840
periodical Editor
Edward Bunting
periodical Title
Bunting - The Ancient Music of Ireland
volume Number
1
issue Content
60 ANCIENT MUSIC OF IRELAND.CHAPTER IV.OF THE VARIOUS EFFORTS TO REVIVE THE IRISH HARP.Or the estimation in which performers on this noble instrument were once held in Ireland itwould be superfluous here to speak. Mr. Walker, in his history of the Irish Bards, hasgiven an account of their power and privileges in former times, of the efforts made for theirsuppression, as persons dangerous to the State at a later period, and of their reduced conditionin his own day. The latter hapters of his work may, indeed, justly be entitled a history ofThe Decline and Fall of the Irish Harp. Yet, before it finally sunk into its present totaldisuse, there were some efforts, worthy of better success, but hitherto unrecorded, made forits revival. After the death of Carolan, and the subsidence of that enthusiasm which hischarming compositions had produced, the condition of the harpers had gradually declined.Persons of the better class had not for a length of time adopted native music as a profession,and, among the numerous wandering performers whom Carolans success had called into thefield, there were, no doubt, many whose conduct reflected little credit on their calling. Stillthe representatives of the genuine old school had not altogether disappeared from the tablesand entertainments of the gentry of native Irish family. Of the latter class was ArthurONeill, whose manners and acquirements were such as at that period would not have beeninconsistent with the pretensions of many country gentlemen. Time following letter fromDoctor MDonnell, who was taught, when a youth, to play on the harp by ONeill, will befound to contain not only a just tribute to the worthy minstrels character, but a very faithfulaccount of the general condition of our harpers at the period referred to.BELFAsT, November 8th, 1838.My DEAR MR. BUNTING,In compliance with your request, I furnish you with some particulars of myacquaintance with Arthur ONeill, the Irish harper, from whom you procured some informa-tion prior to your first publication. My father, who had a great fondness for music, seledtdONeill as the most proper person he then knew to teach his children, and he lived in ourhouse for two years in this capacity; but my fathers death, in 1780, put an end to this study,which we found very difficult, on account of the teacher being blind. At that period almostall harpers were blind, this profession having been humanely reserved as a provision for theSons of reduced gentlemen who happened to be blind, a calamity then much more commonthan at present, owing to improvements in the treatment of small-pox. During the twoyears he lived in the house, he was treated as a poor gentleman, and had a servant. He was
issue Number
1
page Number
72
periodical Author
Edward Bunting
issue Publication Date
1840-01-01T00:00:00
allowedRoles
anonymous,guest,friend,member