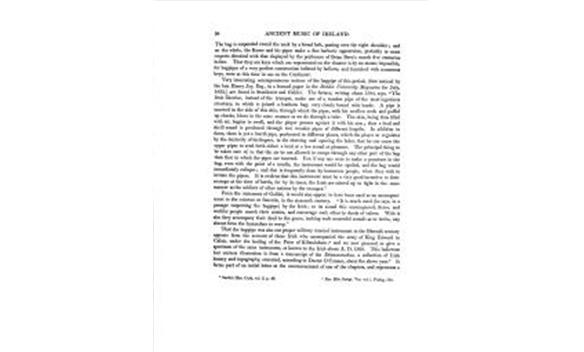 Previous | Next
Bunting - The Ancient Music of Ireland, Volume 1, Issue 1, Page 70
6 views
Favourite | Share | Feedback
periodical Publisher
Hodges & Smith, Dublin, 1840
periodical Editor
Edward Bunting
periodical Title
Bunting - The Ancient Music of Ireland
volume Number
1
issue Content
58 ANCIENT MUSIC OF IRELAND.The bag is suspended round the neck by a broad belt, passing over the right shoulder; andon the whole, the Kerne and his pipes make a fine barbaric appearance, probably in mostrespects identical with that displayed by the performer of Brian Borus march five centuriesbefore. That they are keys which are represented on the chanter is by no means impossible,for bagpipes of a very perfect construction inflated by bellows, and furnished with numerouskeys, were at this time in use on the Continent.Very interesting cotemporaneous notices of the bagpipe of this period, (first noticed bythe late Henry Joy, Esq., in a learned paper in the Dublin, University Magazine for July,1833,) are found in Stanihurst and Galilei. The former, writing about 1584, says, TheIrish likewise, instead of the trumpet, make use of a wooden pipe of the most ingeniousstructure, to which is joined a leathern bag, very closely bound with bands. A pipe isinserted in the side of this skin, through which the piper, with his swollen neck and puffedup cheeks, blows in the same manner as we do through a tube. The skin, being thus filledwith air, begins to swell, and the player presses against it with his arm; thus a loud andshrill sound is produced through two wooden pipes of different lengths. Ii addition tothese, there is yet a fourth pipe, perforated in different places, which the player so regulatesby the dexterity of his fingers, in the shutting and opening the holes, that he can cause theupper pipes to send forth either a loud or a low sound at pleasure. The principal thing tobe taken care of, is, that the air be not allowed to escape through any other part of the bagthan that in which the pipes are inserted. For, if any one were to make a puncture in thebag, even with the point of a needle, the instrument would be spoiled, and the bag wouldimmediately collapse; and this is frequently done by humorous people, when they wish toirritate the pipers. It is evident that this instrument must be a very good incentive to theircourage at the time of battle, for by its tones, the Irish are stirred up to fight in the samemanner as the soldiers of other nations by the trumpet.From the statement of Galilei, it would alsg appear to have been used as an accompani-ment to the caionan at funerals, in the sixteenth century. It is much used (lie says, in apassage respecting the bagpipe) by the Irish; to its sound this unconquered, fierce, andwarlike people march their armies, and encourage each other to deeds of valour. With italso they accompany their dead to the grave, making such mournful sounds as to invite, nayalmost force the bystanders, to weep.That the bagpipe was also our proper military musical instrument in the fifteenth centuryappears from the account of those Irish who accompanied the army of King Edward toCalais, under the leading of the Prior of Kilmainham a and we now proceed to give aspecimen of the same instrument, as known to the Irish about A. D. 1300. This ludicrousbut curious illustration is from a manuscript of the Dinnseanc/zus, a collection of Irishhistory and topography, executed, ac cording to Doctor OConnor, about the above year.b Itforms part of an initial letter at the commencement of one of the chapters, and represents a Smiths Hist. Cork, vol. ii. p. 48. b Rer. Rib. Script. Vet. vol. 1. Proleg. 175.
issue Number
1
page Number
70
periodical Author
Edward Bunting
issue Publication Date
1840-01-01T00:00:00
allowedRoles
anonymous,guest,friend,member