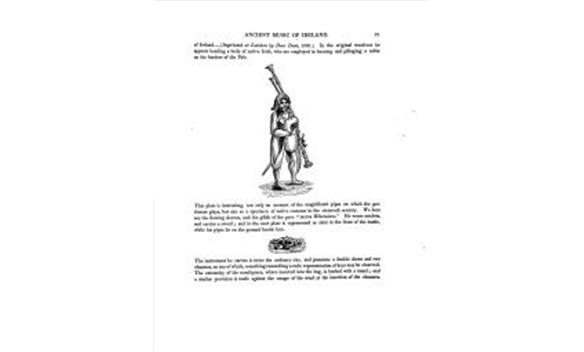 Previous | Next
Bunting - The Ancient Music of Ireland, Volume 1, Issue 1, Page 69
6 views
Favourite | Share | Feedback
periodical Publisher
Hodges & Smith, Dublin, 1840
periodical Editor
Edward Bunting
periodical Title
Bunting - The Ancient Music of Ireland
volume Number
1
issue Content
ANCIENT MUSIC OF IRELAND.57of Ireland.(Imprinted at London by Ihon Daie, 1581.) In the original wood-cut heappears heading a body of native Irish, who are employed in burning and pillaging a cabinon the borders of the Pale.This plate is interesting, not only on account of the magnificent pipes on which the per-former plays, but also as a specimen of native costume in the sixteenth century. We heresee the flowing sleeves, and the glibb of the pure merus ilibernicus. He wears armiets,and carries a sword; and in the next plate is represented as slain in the front of the battle,while his pipes lie on the ground beside him.The instrument he carries is twice the ordinary size, and possesses a double drone and twochanters, on one of which, something resembling a rude representation of keys may be observed.The extremity of the mouthpiece, where inserted into the bag, is bushed with a tassel; anda similar provision is made against the escape of the wind at the insertion of the chanters.4
issue Number
1
page Number
69
periodical Author
Edward Bunting
issue Publication Date
1840-01-01T00:00:00
allowedRoles
anonymous,guest,friend,member