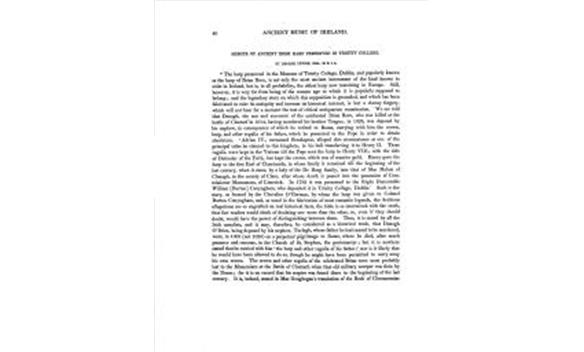 Previous | Next
Bunting - The Ancient Music of Ireland, Volume 1, Issue 1, Page 48
7 views
Favourite | Share | Feedback
periodical Publisher
Hodges & Smith, Dublin, 1840
periodical Editor
Edward Bunting
periodical Title
Bunting - The Ancient Music of Ireland
volume Number
1
issue Content
40 ANCIENT MUSIC OF IRELAND.MEMOIR OF ANCIENT IRISH HARP PRESERVED EN TRINITY COLLEGE.BY GEORGE PETRIE, ESQ., M. R. I. A.The harp preserved in the Museum of Trinity College, Dublin, and popularly knownas the harp of Brian Boru, is not only the most ancient instrument of the kind known toexist in Ireland, but is, in all probability, the oldest harp now remaining in Europe. Still,however, it is very far from being of the remote age to which it is popularly supposed tobelong; and the legendary story on whi h this supposition is grounded, and which has beenfabricated to raise its antiquity and increase its historical interest, is but a clumsy forgery,which will not bear for a moment the test of critical antiquarian examination. We are toldthat Donogh, the son and successor of the celebrated Brian Born, who was killed at thebattle of Clontarf in 1014, having murdered his brother Teague, in 1023, was deposed byhis nephew, in consequence of which he retired to Rome, carrying with him the crownsharp, and other regalia of his father, which he presented to the Pope in order to obtainabsolution. Adrian IV., surnamed Breakspear, alleged this circumstance as one of theprincipal titles he claimed to this kingdom, in his bull transferring it to Henry II. Theseregalia were kept in the Vatican till the Pope sent the harp to Henry VIII., with the titleof Defender of the Faith, but kept the crown, which was of massive gold. Henry gave theharp to the first Earl of Clanricarde, in whose family it remained till the beginning of thelast century, when it came, by a lady of the De Burg family, into that of Mac Mahon ofClenagh, in the county of Clare, after whose death it passed into the possession of Com-missioner Macnamara, of Limerick. In 1782 it was presented to the Right HonourableWilliam [ Burton] Conyngham, who deposited it in Trinity College, Dublin. Such is thestory, as framed by the Chevalier 9 Gorman, by whom the harp was given to ColonelBurton Conyngham, and, as usual in the fabrication of most romantic legends, the fictitiousallegations are so engrafted on real historical facts, the fable is so intermixed with the truth,that few readers would think of doubting one more than the other, or, even if they shoulddoubt, would have the power of distinguishing between them. Thus, it is stated by all theIrish annalists, and it may, therefore, be considered as a historical truth, that DonoghOBrien, being deposed by his nephew, Turlogh, whose father he had caused to be murdered,went, in 1063 (not 1023) on a perpetual pilgrimage to Rome, where he died, after muchpenance and remorse, in the Church of St. Stephen, the protomartyr; but it is nowherestated that he carried with him the harp and other regalia of his father; nor is it likely thathe would have been allowed to do so, though he might have been permitted to carry awayhis own crown. The crown and other regalia of the celebrated Brian were most probablylost to the Momonians at the Battle of C1ontarf when that old military usurper was slain bythe Danes; for it is on record that his sceptre was found there in the beginning of the lastcentury. It is, indeed, stated in Mac Geoghegans translation of the Book of Clonmacnoise
issue Number
1
page Number
48
periodical Author
Edward Bunting
issue Publication Date
1840-01-01T00:00:00
allowedRoles
anonymous,guest,friend,member