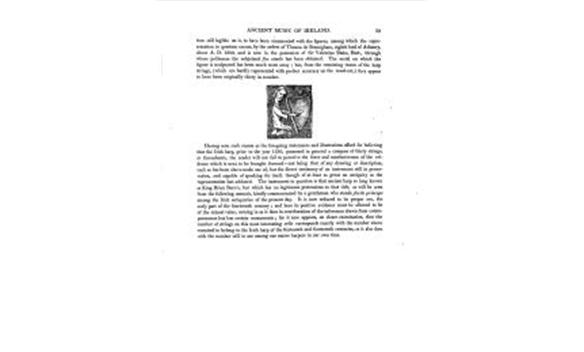 Previous | Next
Bunting - The Ancient Music of Ireland, Volume 1, Issue 1, Page 47
7 views
Favourite | Share | Feedback
periodical Publisher
Hodges & Smith, Dublin, 1840
periodical Editor
Edward Bunting
periodical Title
Bunting - The Ancient Music of Ireland
volume Number
1
issue Content
ANCIENT MUSIC OF IRELAND.39tion still legible on it, to have been ornamented with the figures, among which the repre-sentation in question occurs, by the orders of Thomas de Bramigham, eighth lord of Athenry,about A. D. 1350, and is now in the possession of Sir Valentine Blake, Bart., throughwhose politeness the subjoined fac simile has been obtained. The metal on which thefigure is sculptured has been much worn away ; but, from the remaining traces of the harpstrings, (which are hardly represented with perfect accuracy on the wood-cut,) they appearto have been originally thirty in number.IHaving seen such reason as the foregoing statements and illustrations afford for believingthat the Irish harp, prior to the year 1350, possessed in general a compass of thirty strings,or thereabouts, the reader will not fail to perceive the force and conclusiveness of the evi-dence which is next to be brought forwardnot being that of any drawing or description,such as has been above made use of, but the direct testimony of an instrument still in preser-vation, and capable of speaking for itself, though of at least as great an antiquity as therepresentation last adduced. The instrument in question is that ancient harp so long knownas King Brian Borns, but which has no legitimate pretensions to that title, as will be seenfrom the following memoir, kindly communicated by a gentleman who stands facile princepsamong the Irish antiquaries of the present day. It is now reduced to its proper era, theearly part of the fourteenth century; and here its positive evidence must be allowed to beof the utmost value, coming in as it does in corroboration of the inferences drawn from cotem-poraneous but less certain monuments; for it now appears, on closer examination, that thenumber of strings on this most interesting relic corresponds exactly with the number abovesurmised to belong to the Irish harp of the thirteenth and fourteenth centuries, as it also doeswith the number still in use among our native harpers in our own time.
issue Number
1
page Number
47
periodical Author
Edward Bunting
issue Publication Date
1840-01-01T00:00:00
allowedRoles
anonymous,guest,friend,member