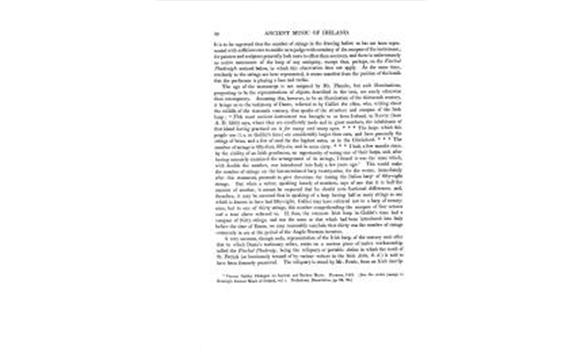 Previous | Next
Bunting - The Ancient Music of Ireland, Volume 1, Issue 1, Page 46
10 views
Favourite | Share | Feedback
periodical Publisher
Hodges & Smith, Dublin, 1840
periodical Editor
Edward Bunting
periodical Title
Bunting - The Ancient Music of Ireland
volume Number
1
issue Content
38 ANCIENT MUSIC OF IRELAND.It is to be regretted that the number of strings in the drawing before us has not been repre-sented with sufficient care to enable us to judge with certainty of the compass of the instrument;for painters and sculptors generally look more to effect than accuracy, and there is unfortunatelyno native monument of the harp of any antiquity, except that, perhaps, on the FiachalPhadruigh noticed below, to which this observation does not apply. At the same time,carelessly as the strings are here represented, it seems manifest from the position of the handsthat the performer is playing a bass and treble.The age of the manuscript is not assigned by Mr. Planche, but such illuminations,purporting to be the representations of objects described in the text, are rarely otherwisethan cotemporary. Assuming this, however, to be an illumination of the thirteenth century,it brings us to the testimony of Dante, referred to by Galilei the elder, who, writing aboutthe middle of the sixteenth century, thus speaks of the structure and compass of the Irishharp: This most ancient instrument was brought to us from Ireland, as DANTE (bornA. D. 1265) says, where they are excellently made and in great numbers, the inhabitants ofthat island having practised on it for many and many ages. The harps which thispeople use (i. e. in Galileis time) are considerably larger than ours, and have generally thestrings of brass, and a few of steel for the highest notes, as in the Glavichord. Thenumber of strings is fifty-four, fifty-six, and in some sixty. I had, a few months since,by the civility of an Irish gentleman, an opportunity of seeing one of their harps, and, afterhaving minutely examined the arrangement of its strings, I found it was the same which,with double the number, was introduced into Italy a few years ago. This would makethe number of strings on the last-mentioned harp twenty-nine, for the writer, immediatelyafter this statement, proceeds to give directions for tuning the Italian harpa of fifty-eightstrings. But when a writer, speaking loosely of numbers, says of one that it is half theamount of another, it cannot be expected that he should note fractional differences, and,therefore, it may be assumed that in speaking of a harp having half as many strings as onewhich is known to have had fifty-eight, Galilei may have referred not to a harp of twenty-nine, but to one of thirty strings, this number comprehending the compass of four octavesand a tone above referred to. If, then, the common Irish harp in Galileis time had acompass of thirty strings, and was the same as that which had been introduced into Italybefore the time of Dante, we may reasonably conclude that thirty was the number of stringscommonly in use at the period of the Anglo-Norman invasion.A very accurate, though rude, representation of the Irish harp, of th century next afterthat to which Dantes testimony refers, exists on a curious piece of native workmanship,called the Fiachal Phadruig, being the reliquary or portable shrine in which the tooth ofSt. iPatrick (so luminously treated of by various writers in the Irish Acta, S. S.) is said tohave been formerly preserved. The reliquary is stated by Mr. Pctrie, from an Irish inscrip-a Vincent GaIilei, Dialogue on Ancient and Modern Music. Florence, 1581. (See The entire passage inBuntings Ancient Music of Ireland, vol. i. Preliminary Dissertation, pp. 24, 25.)
issue Number
1
page Number
46
periodical Author
Edward Bunting
issue Publication Date
1840-01-01T00:00:00
allowedRoles
anonymous,guest,friend,member