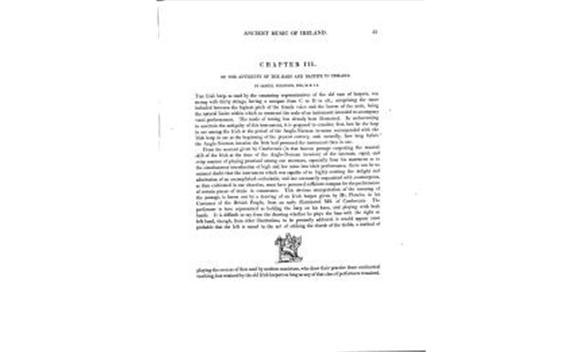 Previous | Next
Bunting - The Ancient Music of Ireland, Volume 1, Issue 1, Page 45
9 views
Favourite | Share | Feedback
periodical Publisher
Hodges & Smith, Dublin, 1840
periodical Editor
Edward Bunting
periodical Title
Bunting - The Ancient Music of Ireland
volume Number
1
issue Content
ANCIENT MUSIC OF IRELAND.37CHAPTER III.OF THE ANTIQUITY OF THE HARP AND BAGPIPE IN IRELAND.BY SAMUEL FERGUSON, ESQ., M. R. I. A.THE Irish harp, as used by the remaining representatives of the old race of harpers, wasstrung with thirty strings, having a compass from C to D in alt., comprising the tonesincluded between the highest pitch of the female voice and the lowest of the male, beingthe natural limits within which to construct the scale of an instrument intended to accompanyvocal performances. The mode of tuning has already been illustrated. In endeavour ngto ascertain the antiquity of this instrument, it is proposed to consider, first, how far the harpin use among the Irish at the period of the Anglo-Norman iiivasion corresponded with theIrish harp in use at the beginning of the present century, and, secondly, how long beforethe Anglo-Norman invasion the Irish had possessed the instrument then in use.From the account given by Cambrensis (in that famous passage respecting the musicalskill of the irish at the time of the Anglo-Norman invasion) of the intricate, rapid, andcrisp manner of playing practised among our ancestors, especially from his statement as tothe simultaneous introduction of high and low notes into their performance there can be norational doubt that the instrument which was capable of so highly exciting the delight andadmiration of an accomplished ecclesiastic, and one necessarily acquainted with counterpoint,as then cultivated in our churches, must have possessed sufficient compass for the performanceof certain pieces of music in consonance. This obvious interpretation of the meaning ofthe passage, is borne out by a drawing of an Irish harper given by Mr. Planche, in hisCostumes of the British People, from an early illuminated MS. of Cambrensis. Theperformer is here represented as holding the harp on his knee, and playing with bothhands. It is difficult to say from the drawing whether he plays the bass with the right orleft hand, though, from other illustrations, to be presently adduced, it would appear mostprobable that the left is raised in the act of striking the chords of the treble, a method ofplaying the reverse of that used by modern musicians, who draw their practice from continentalteaching, but retained by the old Irish harpers so long as any of that class of performers remained
issue Number
1
page Number
45
periodical Author
Edward Bunting
issue Publication Date
1840-01-01T00:00:00
allowedRoles
anonymous,guest,friend,member