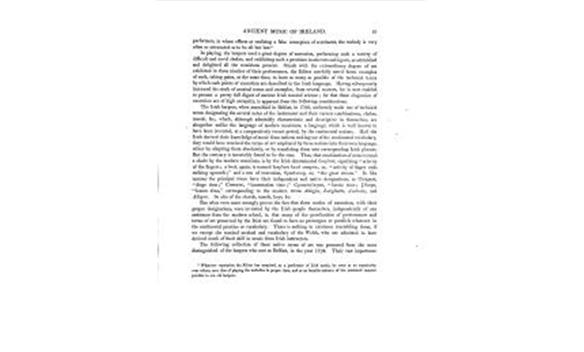 Previous | Next
Bunting - The Ancient Music of Ireland, Volume 1, Issue 1, Page 25
12 views
Favourite | Share | Feedback
periodical Publisher
Hodges & Smith, Dublin, 1840
periodical Editor
Edward Bunting
periodical Title
Bunting - The Ancient Music of Ireland
volume Number
1
issue Content
ANCIENT MUSIC OF IRELAND. 19performers, in whose efforts at realizing a false conception of sentiment, the melody is veryoften so attenuated as to be all but lost.In playing, the harpers used a great degree of execution, performing such a variety ofdifficult and novel shakes, and exhibiting such a precision in staccato and legato, as astdnishedand delighted all the musicians present. Struck with the extraordinary degree of artexhibited. in these niceties of their performance, the Editor carefully noted down examplesof each, taking pains, at the same time, to learn as many as possible of the technical termsby which such points of execution are described in the Irish language. having subsequentlyincreased his stock of musical terms and examples, from several sources, he is now enabledto present a pretty full digest of ancient Irish musical science; for that these elegancies ofexecution are of high antiquity, is apparent from tile following considerations.The Irish harpers, when assembled in Belfast, in 1792, uniformly made use of technicalterms designating the several notes of the instrument and their various combinations, shakes,moods, &c., which, although admirably characteristic and descriptive in themselves, arealtogether unlike the language of modern musicians, a language which is well known tohave been invented, at a comparatively recent period, by the contmeutal nations. Thud theIrish derived their knowledge of music from nations making use of the continental vocabulary,they would have received the terms of art employed by these nations into theirown language,either by adopting them absolutely, or by translating them into corresponding Irish pl rases.But the contrary is invariably found to be tile case. Thus, that combination of notes termeda shake by the modern musicians, is by the Irish denominated 6cqilm -, signifying activityof the fingers ; a beat, again, is termed a 1 ilui beat anapne, or, activity of linger endsstriking upwards ; and a run of execution, Spuit-mop, or, the great stream. In likemanner the primicipal times have their independent and native designations, as Oui pa ,dirge time ; Curiiab , lamentation time ; C 1 iuai de 1 ct , heroic time ; phupr,lesson time, corresponding to the modern terms Adagio, Larghetto, A lula ate, andAllegro. So also of the chords, moods, keys, &c.But what even more strongly proves the fact that these modes of execution, with theirproper designations, were invented by tile Irish people themselves, independently of anyassistance from the modern school, is, that many of tile peculiarities of performance andterms of art preserved by the Irish are found to have no prototypes or parallels whatever inthe continental practice or vocabulary. There is nothing in existence resembling them, ifwe except the musical method and vocabulary of the Welsh, who are admitted to havederived much of their skill in music from Irish instructors.The following collection of these native terms of art was procured from the mostdistinguished of the harpers who met at Belfast, in tue year 1792. Their vast importancea Whatever reputation the Editor has acquired, as a performer of Irish music, he owes to no superiorityover others, save that of playing the melodies in proper time, and as an humble imitator of the animated mannerpeculiar to our old harpers.
issue Number
1
page Number
25
periodical Author
Edward Bunting
issue Publication Date
1840-01-01T00:00:00
allowedRoles
anonymous,guest,friend,member