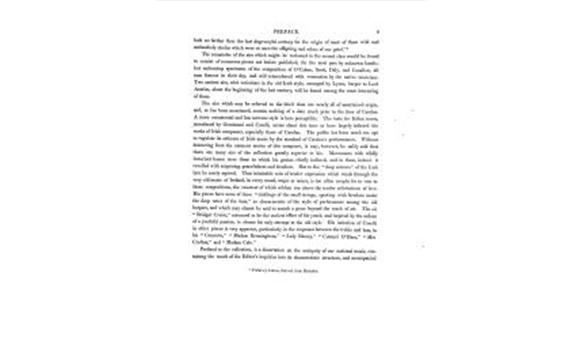 Previous | Next
Bunting - The Ancient Music of Ireland, Volume 1, Issue 1, Page 15
6 views
Favourite | Share | Feedback
periodical Publisher
Hodges & Smith, Dublin, 1840
periodical Editor
Edward Bunting
periodical Title
Bunting - The Ancient Music of Ireland
volume Number
1
issue Content
PREFACE. 9look no farther than the last disgraceful century for the origin of most of those wild andmelancholy strains which were at once the offspring and solace of our grief. aThe remainder of the airs which might be reckoned in the seeoi d class would be foundto consist of numerous pieces not before published, for the most part by unknown hands;but embracing specimens of the composition of OCahan, Scott, Daly, and Conallon, allmen famous in their day, and still remembered with veneration by the native musicians.Two ancient airs, with variations in the old Irish style, arranged by Lyons, harper to LordAntrim, about the beginning of the last century, will be found among the most interestingof these.The airs which may be referred to the third class are nearly all of ascertained origin,and, as has been mentioned, contain nothing of a date much prior to the time of Carolan.A more ornamental and less nervous style is here perceptible. The taste for Italian music,introduced by Geminiani and Corelli, seems about this time to have largely infected theworks of Irish composers, especially those of Carolan. The public has l)eCli much too aptto regulate its estimate of Irish music by the standard of Carolans performances. Withoutdetracting from the eminent merits of this composer, it may, however, 1)0 safely said thatthere are many airs of the collection greatly superior to his. Movements with wildlyluxuriant basses were those to which his genius chiefly inclined, and in tl1ese, indeed, itrevelled with surprising gracefulness and freedom. But to the deep sorrows of the irishlyre he rarely aspired. That inimitable vein of tender expression which winds through thevery old music of Ireland, in every mood, major or minor, is too often sought for in vain iiithose compositions, the sweetest of which seldom rise above the tender solicitations of love.His pieces have none of those tinklings of the small strings, sporting with freedom underthe deep notes of the bass, so characteristic of the style of performance among the oldharpers, and which may almost be said to snatch a grace beyond the reach of art. The airBridget Cruise, esteemed to be the earliest effort of his youth, and inspired by the ardourof a youthful passion, is almost his only attempt at the old style. His imitation of Corelliin other pieces is very apparent, particularly in the responses between the treble and bass, inhis Concerto, Madam Bermingham, Lady Blaney, Colonel OIiara, MrsCrofton, and Madam Cole.Prefixed to the collection, is a dissertation on the antiquity of our national music, con-taming the result of the Editors inquiries into its characteristic structure, and accompaniedPrefatory Letter, aid vol. Irish Melodies.
issue Number
1
page Number
15
periodical Author
Edward Bunting
issue Publication Date
1840-01-01T00:00:00
allowedRoles
anonymous,guest,friend,member