Home  »  The Lark on the Strand 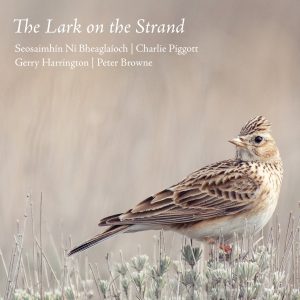 The Lark on the Strand

The tour concert on the night of Friday 21st of January 2000 took place in Gaelscoil na Cille in Ashbourne, Co. Meath – organised by Cultúrlann na Cille – and a recording was made which was kept but gradually forgotten over a twenty-year period. It surfaced again through a chance discovery, lying in a cardboard box in an attic during the pandemic lockdown period of 2020 and it was a fortunate find! The music and song sounded fresh and had much of the spirit and spontaneity that can often accompany a live onstage occasion.

After listening, everyone agreed that the performances, choice of material, playing togetherness, recording quality and an overall feeling of an enjoyable atmosphere, had stood up very well and would have appeal if brought to a wider audience of traditional music followers.

There is plenty of variety here – nineteen tracks in all – with songs in Irish and English, trios, duets and solos playing reels, double jigs, slip jigs, hornpipes, polkas, slides, marches, slow airs and a set dance. The four performers are all recognised for their own individual careers and achievements in music, and they came together and blended very well on this unique night in Ashbourne. The sounds of voice, accordion, fiddle and pipes express much of what is best at the heart of the Irish music tradition.