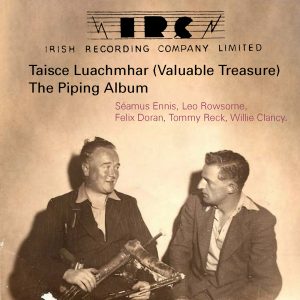 Taisce Luachmhar (Valuable Treasure) – The Piping Album features recordings made by Bill Stapleton and the Irish Recording Company in the late 1940s and the 1950s.

In 1947, Bill Stapleton, a young man originally from Kilkenny, opened a recording studio on Moore Street in Dublin. As part of the studio’s operations, Stapleton set up a new record label, the Irish Recording Company. The label recorded many of the leading traditional musicians of the day and planned to commercially release the music. When Bill Stapleton’s plans for the Irish music label didn’t work out, the master recordings were passed by Bill to Breandán Breathnach for safe-keeping. Breandán subsequently gave the records to Harry Bradshaw and now, 73 years after they were made, the piping records are finally available.

The 19 tracks on the album include almost all of the leading pipers of the day, Séamus Ennis, Leo Rowsome, Felix Doran, Tommy Reck and Willie Clancy and a great variety of piping styles are represented, demonstrating the cultural richness of the piping tradition in the mid-twentieth century. The booklet included with the album features a full-length article by Harry Bradshaw on Bill Stapleton and the Irish Recording Company, short artist biographies and tune notes.

An accompanying album of fiddle recordings Taisce Luachmhar (Valuable Treasure) – The Fiddle Album made by Bill Stapleton has been released by Cairdeas na bhFidiléirí (CNF011).