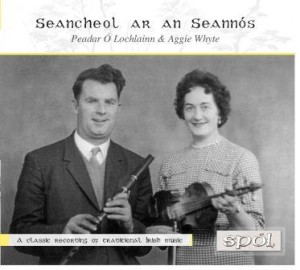 The SPÓL record label was one of Breandán Breathnach’s many projects. He
intended it to be the vehicle for recordings of genuine Irish traditional music, but
only got around to issuing a single music recording, although one other disc was
issued a tutorial on the pronunciation of Irish with Mairtín Ó Cadhain as the
speaker.

These recordings were made in 1963 at Bill Stapleton’s Studio in Dublin, and the
tracks have been re-mastered for this re-issue by Harry Bradshaw. The following
is Breandán Breathnach’s original sleeve note:

Lovers of Irish music will need no introduction to Aggie Whyte (Mrs. Seamus
Ryan) and Peadar Ó Lochlainn who together over the years on radio and at
fleadhanna ceoil have delighted all with their music.

Aggie Whyte, who hails from the Ballinakill district in Galway, comes from
generations of musicians; her father, Tommy Whyte, was a member of the
famous Ballinakill Céilí Band. She was awarded the Gold Medal in the
competition for traditional fiddle playing at the Oireachtas in 1958 and in the
same year with Peadar Ó Lochlainn won the competition for duets at this
musical festival.

Peadar Ó Lochlainn, who had four years previously won the competition for
flute playing, comes from Kilmaley, County Clare. He is an all-round
musician, having many firsts to his credit for flute, fiddle and pipe playing. He
is a member of the well-known Tulla Céilí Band.
In a perfect blending of fiddle and flute these two musicians illustrate in well
chosen melodies the richness of Irish folk-music.