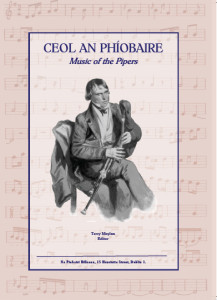 CEOL AN PHÍOBAIRE – MUSIC OF THE PIPERS is a collection of traditional Irish dance tunes and piping pieces notated from the playing of famous players of the Irish uilleann pipes. It includes informative notes on the music, and pictures of the two dozen pipers covered by the collection.

The uilleann pipes are the iconic instrument of Ireland, and the names of the players who have become masters of it are celebrated worldwide – names like Séamus Ennis and Willie Clancy; the traveller brothers Johnny and Felix Doran; and Patsy Touhey and Barney Delaney, who each achieved celebrity status in early twentieth-century America. Along with these are many other top-rank players known only to the enthusiast, but deserving of investigation by all lovers of traditional music. The music includes all manner of dance tunes, as well as several ‘pieces’ – items that pipers played just for listening, including the well-known “Fox Chase” which describes musically the progress of a foxhunt and the death of the fox, and the descriptive piece “Gol na mBan san Ár” (“The weeping of the women amid the slaughter”), which describes the aftermath of the Battle of Aughrim (1691) and which, having been recorded on cylinder from a Kerry piper in 1899 is the oldest surviving recording of Irish traditional music. The dates of the performances from which the music was notated span almost one and a half centuries, from the performances noted by Lord Rossmore from the Galway piper Paddy Conneely in the mid-nineteenth century, through the collections of the Feis Ceoil movement, to the performances recorded by piping enthusiasts in the 1970s. The music and commentary was prepared for publication by Breandán Breathnach and Pat Mitchell, both authorities in the field of Irish music, and was edited by Terry Moylan.