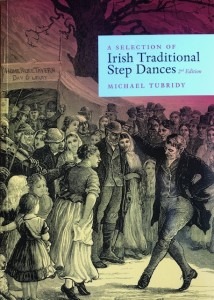 The art of Irish traditional step-dancing is centuries old, with an established canon of dances and versions of dances that were once popular through the country. But before Michael Tubridy’s innovative transcriptions, they had never been notated in a consistent way, nor published.

In the 1990s Michael developed a notation system to describe verbally and visually the dances that he and his wife Céline had been collecting and teaching, and his first collection of the dances was published in 1998. The collection un-locked the mysteries of Irish solo dance for dancers around the world.

Since the publication of the first selection Michael has collected more dances, and has refined his notation system to make it easier to use, replacing music symbols with diagrams of the dancer’s feet.

This two-volume collection, and the accompanying DVDs will play a major part in revolutionising the teaching of this wonderful Irish gift to the world