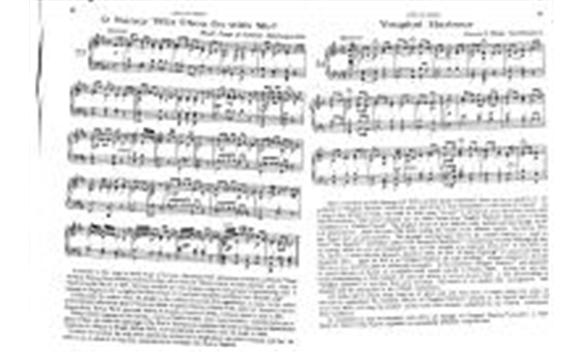 Previous | Next
O'Neill - Waifs and Strays of Gaelic Melody, Volume 1, Issue 1, Page 32
9 views
Favourite | Share | Feedback
periodical Publisher
1922
periodical Editor
O'Neill, Capt. Francis
periodical Title
O'Neill - Waifs and Strays of Gaelic Melody
volume Number
1
issue Content
36AIRS (md SONGS0 Nancy Wilt Thou Go with Me?A footnote t 0 this song in Wood Songs of Scoaand_ Edinbu .h, 1848 epitomizes its history as follows:TheseWords by Thoma Percy, Bishop of Dromore, were set to music by Thomas Carter an Irish musician and sung atVauxhall by Mr.Vernon in 1773, We have inserted this very popular song for the purpose of Proclaiming that itbelongs to England, thd a slightly Scotified version of it has been repeatedly published as a Scottish song?In this ballad the author voices his delight on the release of his wife from appointment as nurse to the- infantprince Edward, afterwards Duke of Kent and father of Queen Victoria. Famous as the author of Reliqijes of AncientEfl glish Poe try Parson Percy was made bishop of Droniore, County of Down, Ireland, where he died in 1811.Thomas Carter composer of the melody, a native of Dublin studied music under his father Timothy Carter an or-ganist of that city. Under the patronage of the Earl of Inchiquin, he Completed his musical education at Naplesjjewasconductor of a theatre at Bengal, British India, and subsequently at London until his death in 1804.In review we find that the song above named was written by an Englishm who died in Ireland, and that themusic or air to which it is sung was composed by an frishm who died in England.AIRS and SONGS 37Yough al I-Iarb ourFrancis E .Walsh. San Francisco-. - 1- lJ- JlrIrrJr : rJrJ1 H:I:oreso.$P r -dim.Aitho overlooked by both Bunting and Petrie in their great collections, there can be no question of theantiquity of Youghal Harbour which by name and strain is still remembered in the south of Ireland. Asa song it was printed in Irish, and under its Irish name Fochaill in Hardimans Irish Mtstrelsy,Lond0fl,lSSwith the notation; Few of our national airs are better known than Youghal Harbour which bears a strongresemblance to Caithlin Tirriall. The original words of that favbrite rustic ballad have been thought worth-y of preservation! About the year 1786 while making the rounds of the Munster circuit, the famous Phil-pot Curran met an army deserter. The eloquent barrister gave voice to the soldiers feeling in a song en-titled The Deserter sometimes called The Deserters Meditation commencing If sadly thinking th spir-its sinking which his son and biographer tells us was adapted to a plaintive Irish air? In No. XVII, ofThe Citizen, or Di blin Monthly Magazine issued in 1841, we find If Sadly Thinking in music scorewith ex-planatory notes. Again we find it as Youghal Harbour (If sadly thinking) without comment in Harer1y300 Irish Airs, New York, 1858-9, differently arranged. In the meantime Youghal Harbour had appearedin Lynchs Melodies of Ireland an incomplete work issued serially in Dublin, 1845. Among the airs scat-tered promiscuoUslY in both volumes of Mooneys History of Ireland, Boston, 1857, a less florid setting ofYoughal Harbour in two-four time is to be found. By reason of its rhythm this arrangement wasclassed with the Hornpipes in the ONeill Collections.All works above named being long out of print, and now very rare, it comes within the scope ofour aim to supplement the selected version of Youghal Harbour printed in Dr. Joyces last work OldIrish Folk Iifn sic and Song, by another chosen from four variants submitted by our liberal contributorfrom California.In conclusion it may be remarked that while all settings of Youghal Harbour preserve a siinu-larity of strin, they may be regarded as essentially different compositions.Acsda teWoods So u gs of Scotla ci. Edi%b l 4 18 48Moderato54r1
issue Number
1
page Number
32
periodical Author
O'Neill, Capt. Francis
issue Publication Date
1980-01-01T00:00:00
allowedRoles
anonymous,guest,friend,member