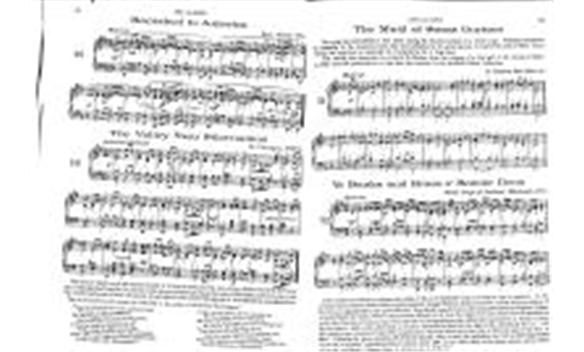 Previous | Next
O'Neill - Waifs and Strays of Gaelic Melody, Volume 1, Issue 1, Page 31
6 views
Favourite | Share | Feedback
periodical Publisher
1922
periodical Editor
O'Neill, Capt. Francis
periodical Title
O'Neill - Waifs and Strays of Gaelic Melody
volume Number
1
issue Content
34AIRS and SONGSBanished to AmericaRieeWalsh Mss.AIRS and SONGSThe Maid of Sweet GtirteenThe song was undoubtedly a best seller among the favorite ballads of a century ago. Probably, stimulatedby sympathY for the enamored swain who was forbidden by his proud parent to marry the maid of lower socialrating, th&sOng had an amazing run of popularity for a long time.The setting here presented as noted by Dr. Hudson from the singing of a little girl in the streets of Dublinin 1840 deserves preservation no less than the variants in the Stanford Petrie Collection.ModerafoI I I I51StprriiI IJ LIH. Hudson Mss. 1840-41tiIIII_.1 lILI _. 1 lr 1 11j 1I I, kIl JJL I iip rj.l i II I Ij-Irr irj IiSpirUoso1.Ye Banks and Braes o Bonnie DoorWoods Songs of Scotla id, Ed i ibwrgh, 184852t r This ne air which runs to the unusual number of 14 bars in each part was sent me by a Dublin friend Mr. M. Flana-gan a distingt ished linquist and scholar. In his leisure moments,he enjoys the music of his fiddle,and Union pipes, be.ing a skilful performer on both instruments A brief sketch of his eventful life appears in Irish 4b na regs and ifusiciana.The air is ancient but the verses are attributed to the author of the dramaKnocknag 0Alone, all alone by the Wave.washed strand,All alone in the crow dha1l;The hail is gay,and the waves are grand,But my heart is not here at all;It flies far away, by night and by day,To the times, and the joys that are gone,And I ne r can frget,the SWeetmajden Imet,In the valley near Sliavnamon!I t I , I I , , -r rIt was not the grace, of her queenly air,Nor her cheek of the roses glow,Nor her soft black eyes, nor her flowing hair,Nor was it her iily.whjte browTwas the soul of truth, and of melting ruth,And the smile like a summer dawnThat stole my heart away, one mild autumn dayIn the valley near Sliavnamon.1I - [ Y [In the absence of historical evidence,the origin of the air to which this song is set may be open to question. In thecorrespondence between Robert Burns and his publisher George Thomson,frequent mention is made of the excellence ofthe Irish airs appropriated for the poets effusions. From Wood Songs o/Scotland Edinburgh,1848,edited by Farquhar Grahamwe quote Burns own words: Now to show you how difficult it is to trace the origin of our airs; I have heard it repeatedly as-serted that this was an Irish air; nay I have met with an Irish gentleman who affirmed he had heard it in Ireland amongthe old women; while on the other hand, a countess imforined me that the first person who introduced the air intothis country was a baronet lady of her acquaintance who took down the notes from an itinerant piper in the Isle ofMan Following the above quotation Mr. Graham remarks: Very recently the publishers met with a sheet song entitledList! list to my story published without imprint about 1801, as the water mark on the paper shows, and on whichV Banks and Braes o Bonnie Doon is stated to be an Irish airJ
issue Number
1
page Number
31
periodical Author
O'Neill, Capt. Francis
issue Publication Date
1980-01-01T00:00:00
allowedRoles
anonymous,guest,friend,member