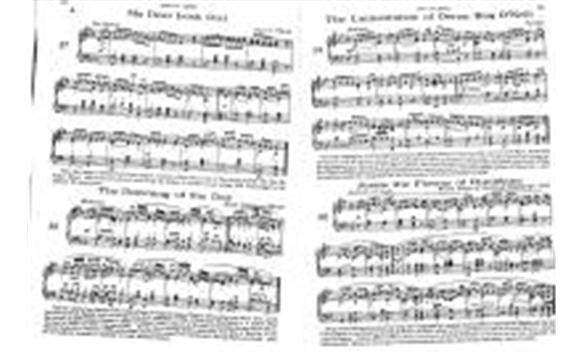 Previous | Next
O'Neill - Waifs and Strays of Gaelic Melody, Volume 1, Issue 1, Page 28
6 views
Favourite | Share | Feedback
periodical Publisher
1922
periodical Editor
O'Neill, Capt. Francis
periodical Title
O'Neill - Waifs and Strays of Gaelic Melody
volume Number
1
issue Content
28AIRS and SONGSCon. Spirito.My Dear Irish GirlCapt. F. ONeill.AIRS and SONGSThe Lamentation of Owen39Ro ONeill29a.Carol an i . .p .INot a few songs or ballads have been sung to a variant of this old air, one of them being named The Hat MyFather Wore; where the second part came from the Editors is unable to say, except that it has lodged in hismemory for many years.The Dawningfoderago DayAirds &of theThis fine composition is attributed to Carolan in B .iing8 General Collection of the Ancient Irish Music, DublinlZ96;Ifardimams lrish .P,finstrelsy, Londo 1831; and Clintons Gems of Ireland, London 1841. Grattan Flood an eminent au-thority states in his A History of Irish Music, Ditblin, 1905,that this glorioUSLamantwa composed on the death ofOwenRoe ONeill in1649a date preceding Carolan s birth by twenty -OneYears. Owen Roe ONeill,prinCe of Ulster,was a gal-lant military leader who vanquished the British forces t the battle of Benburb in 1646.Jessie the Flower of DilnblaneWoods Son. s of Scotlan.d, Edi burgh 1848An.dan.te con. moto ____ ____This fine aii the best known of the Compositions of the great harper Thomas OConnellan was taken from AirdsL 9 published in 1788. OConnell an flourished in a period whenthe renown of Irish harpers became a matter of history. After a sojourn of 20 years in Scotland,h returned to his na-tive land in 1689, and died nine years later. As the above Setting differs materially from that of Bunting in hisSecond Collection issued in 1809, and others much more recent, its introduction among Wazfs and Strays maybe not without interest to students of Irish musical history.. Early in the nineteenth century this song was composed by a modest weaver Robert Tannahill of Paisley and was setto an alleged ancient Scottish inelody,by Robert A. Smith author of the Irish Minstrel, and the Scottish Minstrel. According to Farqubar Graham editor of Woods Song of Scotland, not a few of the airs in the latter work were composed bySmith himself.WhateVe the origin of the above melody may have been it has a decidedly Gaelic tonality.
issue Number
1
page Number
28
periodical Author
O'Neill, Capt. Francis
issue Publication Date
1980-01-01T00:00:00
allowedRoles
anonymous,guest,friend,member