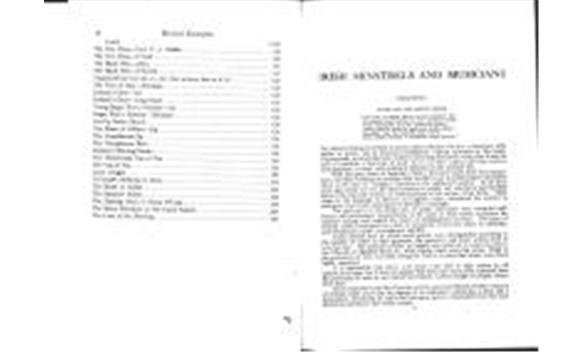 Previous | Next
O'Neill - Irish Minstrels and Musicians, Volume 1, Issue 1, Page 9
5 views
Favourite | Share | Feedback
periodical Publisher
Regan Printing House, Chicago, 1913
periodical Editor
[none]
periodical Title
O'Neill - Irish Minstrels and Musicians
volume Number
1
issue Content
16 Musical ExamplesNAMES PAGEThe Fox ChaseProf. P. J. Griffith . 129The Fox ChaseONeill 130The Black BirdAidayThe Black BirdOFarrell 131Faga.maoid sud mar ata scAir (Let us leave that as it is) 132The First of MayHornpipe 132Rodneys GloryAir 132Rodneys GloryLong Dance 132Young Roger Was a PlowboyAir 33Roger Was a P lowboyHornpipe 133Get Up EarlyMarch 134The Rakes of KildareJig 34The Templehouse Jig 34The Templehouse Reel 134Jacksons Morning Brush 135The Unfortunate Cup of Tea 135The Cup of Tea 135Latry Grogan 182OConnells \Velcome to Clare 215The Rocks of Cashel 420The Butchers March 429The Planting Stick, or Bryan OLynn 429The Merry Merchant, or The Canny Sugach 430The Lark in the Morning 431rHIRISH MINSTRELS AND MUSICIANSCHAPTER IBARDS AND THE BARDIC ORDERSYou too ye bards whom sacred raptures fireTo chaunt your heroes to your countrys lyre;Who consecrate in your immortal strainBrave patriot souls in righteous battle slain;Securely now the tuneful task renew,How nobler themes in deathless songs pursue.No subject relating to Ireland in ancient times whether it be law or literature, mili-tarism or music, can be discussed intelligently without reference to the bardsConsequently so much has been written concerning the bardic order, that it may besaid to constitute a literature in itself. for in no other country did they exist insuch numbers, or exert such dominant influence on the national life.With the grey dawn of legendary history the bards make their first appear-ance. and they continued to exercise their peculiar sway in uninterrupted successiondown to the days of Turlogh OCarolan in the eighteenth century. In all thoseearly ages when war was the chief business of society and commerce was but littleknown, the romantic scenery of Ireland echoed to the strains of her bards. Theirsongs in the language of Brewer, an English writer, stimulated the warrior toenterprise and raised enthusiasm in the hail of triumph.The professors of the divine arts of poetry and music were rewarded withhonors and emoluments proportionate to the value of their efforts to elevate thenational feeling, and exploit the deeds of distinguished warriors. The harp ofIreland which constituted its pride in prosperity proved its solace in adversity,and stimulated a spirit of romance in real life.Under ancient laws by which social grades were distinguished according tothe number of colors in their garments, the peasantry and lower orders were tohave but one. The principal nobility or knights were allowed to wear five colors;the Ollamlis or dignified bards six, while royalty itself wore but seven. High asthe profession of arms was held among the Irish it is clear that letters were morehighly respected.It is undeniable that poetry and music were held in high esteem by allnations in all ages, but it does not appear that those arts were more respected thanthe profession of arms in an nation but Ireland, warlike though its people alwayshave been.Seven centuries before the Christian era the renowned Ollamh Fodhla monarchof Ireland, made a law that the dignity of an antiquary, a physician, a poet, and aharp-player, should not be conferred but upon pei oiis descended from the mostillustrious families in the whole country.17
issue Number
1
page Number
9
periodical Author
O'Neill, Capt. Francis
issue Publication Date
1913-01-01T00:00:00
allowedRoles
anonymous,guest,friend,member