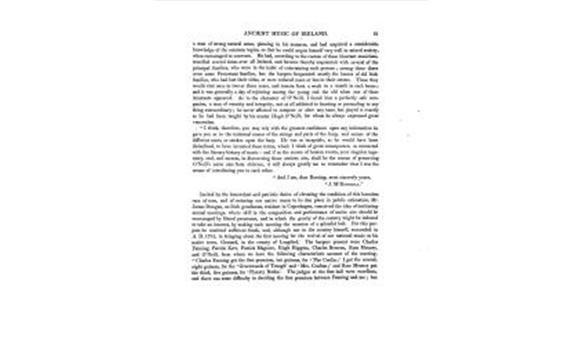 Previous | Next
Bunting - The Ancient Music of Ireland, Volume 1, Issue 1, Page 73
6 views
Favourite | Share | Feedback
periodical Publisher
Hodges & Smith, Dublin, 1840
periodical Editor
Edward Bunting
periodical Title
Bunting - The Ancient Music of Ireland
volume Number
1
issue Content
ANCIENT MUSIC OF IRELAND. 61a man of strong natural sense, pleasing in his manners, and had acquired a considerableknowledge of the common topics, so that he could acquit himself very well in mixed society,when encouraged to converse. He had, according to the custom of these itinerant musicians,travelled several times over all Ireland, and became thereby acquainted with several of theprincipal families, who were in the habit of entertaining such persons; among these therewere some Protestant families, but the harpers frequented mostly the houses of old Irishfamilies, who had lost their titles, or were reduced more or less in their estates. These theywould visit once in two or three years, and remain from a week to a month in each house;and it was generally a day of rejoicing among the young and the old when one of thoseitinerants appeared. As to the character of ONeill, I found him a perfectly safe com-panion, a man of veracity and integrity, not at all addicted to boasting or pretending to anything extraordinary; he never affected to compose or alter any tune, but played it exactlyas he had been taught by his master Hugh ONeill, for whom he always expressed greatveneration.I think, therefore, you may rely with the greatest confidence upon any information hegave you as to the technical names of the strings and parts of the harp, and names of thedifferent notes, or strokes upon the harp. lie was as incapable, as he would have beendisinclined, to have invented these terms, which I think of great consequence, as connectedwith the literary history of music and if in the course of human events, your singular inge-nuity, zeal, and success, in discovering those ancient airs, shall be the means of preservingONeills name also from oblivion, it will always gratify me to remember that I was themeans of introducing you to each other.And I am, dear Bunting, most sincerely yours,J. MDONNELL.Incited by the benevolent and patriotic desire of elevating the condition of this harmlessrace of men, and of restoring our native music to its due place in public estimation, Mr.James Dungan, an Irish gentleman, resident in Copenhagen, conceived the idea of institutingannual meetings, where skill in the composition and performance of native airs should beencouraged by liberal premiums, and in which the gentry of the country might be inducedto take an interest, by making each meeting the occasion of a splendid ball. For this pur-pose he remitted sufficient funds, and, although not in the country himself, succeeded inA. D. 1781, in bringing about the first meeting for the revival of our national music at hisnative town, Granard, in the county of Longford. The harpers present were CharlesFanning, Patrick Kerr, Patrick Maguire, Hugh Higgins, Charles Berreen, Rose Mooney,and ONeill, from whom we have the following characteristic account of the meeting.Charles Fanning got the first premium, ten guineas, for The Coolin; I got the second,eight guineas, for the Greenwoods of Truagh and Mrs. Crofton; and Rose Mooney gotthe third, five guineas, for Planxty Burke. The judges at the first ball were excellent,and there was some difficulty in deciding the first premium between Fanning and me; but
issue Number
1
page Number
73
periodical Author
Edward Bunting
issue Publication Date
1840-01-01T00:00:00
allowedRoles
anonymous,guest,friend,member