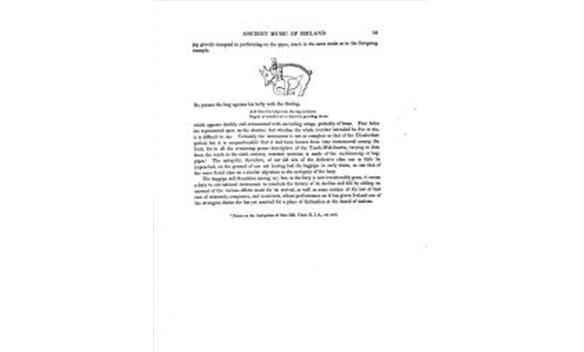 Previous | Next
Bunting - The Ancient Music of Ireland, Volume 1, Issue 1, Page 71
4 views
Favourite | Share | Feedback
periodical Publisher
Hodges & Smith, Dublin, 1840
periodical Editor
Edward Bunting
periodical Title
Bunting - The Ancient Music of Ireland
volume Number
1
issue Content
ANCIENT MUSIC OF IRELAND.59pig gravely occupied in performing on the pipes, much in the same mode as in the foregoingexample.He presses the bag against his belly with the foreleg,And from his lungs into the bag is blownSupply of needful air to feed the growling drone,which appears double, and ornamented with encircling straps, probably of brass. Four holesare represented open on the chanter, but whether the whole number intended be five or six,it is difficult to say. Certainly the instrument is not so complete as that of the Elizabethanperiod, but it is unquestionable that it had been known from time immemorial among theIrish, for in all the remaining poems descriptive of the Teach-Midchuarta, varying in datefrom the tenth to the sixth century, constant mention is made of the cushlannaig or bag-pipes.a The antiquity, therefore, of our old airs of the defective class can as little beimpeached, on the ground of our not having had the bagpipe in early times, as can that ofthe more florid class on a similar objection to the antiquity of the harp.The bagpipe still flourishes among us; but, as the harp is now irretrievably gone, it seemsa duty to our national instrument to conclude the history of its decline and fall by adding anaccount of the various efforts made for its revival, as well as some notices of the last of thatrace of minstrels, composers, and musicians, whose performance on it has given Ireland one ofthe strongest claims she has yet asserted for a place of distinction at the board of nations.Petrie on the Antiquities of Tara Hill, Trans. R. 1. A., vol. xviii.
issue Number
1
page Number
71
periodical Author
Edward Bunting
issue Publication Date
1840-01-01T00:00:00
allowedRoles
anonymous,guest,friend,member