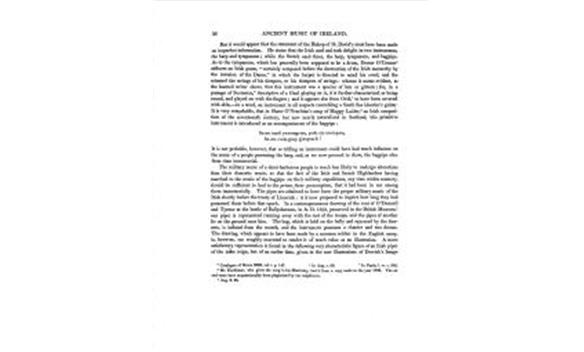 Previous | Next
Bunting - The Ancient Music of Ireland, Volume 1, Issue 1, Page 68
4 views
Favourite | Share | Feedback
periodical Publisher
Hodges & Smith, Dublin, 1840
periodical Editor
Edward Bunting
periodical Title
Bunting - The Ancient Music of Ireland
volume Number
1
issue Content
56 ANCIENT MUSIC OF IRELAND.But it would appear that the statement of the Bishop of St. Davids must have been madeon imperfect information. He states that the Irish used and took delight in two instruments,the harp and tympanum; while the Scotch used three, the harp, tympanum, and bagpipe.As to the tympanum, which has generally been supposed to be a drum, Doctor OConnoraadduces an Irish poem, certainly composed before the destruction of the Irish monarchy bythe invasion of the Danes, in which the harper is directed to mind his cruit, and theminstrel the strings of his tionzpan, or his tiompan of strings: whence it seems evident, asthe learned writer shows, that this instrument was a species of lute or gittern; for, in apassage of Suetonius, descriptive of a Gaul playing on it, it is further characterized as beinground, and played on with the fingers; and it appears also from Ovid,c to have been coveredwith skin,in a word, an instrument in all respects resembling a South Sea islanders guitar.It is very remarkable, that in Shane ONeachtans song of Maggy Laider,d an Irish composi-tion of the seventeenth entury, but now nearly naturalized in Scotland, this primitiveinstrument is introduced as an accompaniment of the bagpipe:Seum bum r ean can, piob ctr 1ompan,So an coirn- aip & eoTiuchIt is not probable, however, that so trifling an instrument could have had much influence onthe music of a people possessing the harp, and, as we now proceed to show, the bagpipe also,from time immemorial.The military music of a demi-barbarous people is much -less likely to undergo alterationsthan their domestic music, so that the fact of the Irish and Scotch Highianders havingmarched to the music of the bagpipe on their military expeditions, any time within memory,should be sufficient to lead to the prima facie presumption, that it had been in use amongthem immemorially. The pipes are admitted to have been the proper military music of theIrish shortly before the treaty of Limerick: it ii now proposed to inquire how long they hadpossessed them before that epoch. In a contemporaneous drawing of the rout of ODonnelland Tyrone at the battle of Ballyshannon, in A. D. 1593, preserved in the British Museum,eone piper is represented running away with the rest of the troops, and the pipes of anotherlie on the ground near him. The bag, which is held on the belly and squeezed by the fore-arm, is inflated from the mouth, and the instrument possesses a chanter and two drones.The drawing, which appears to have been made by a common soldier in the English army,is, however, too roughly executed to render it of much value as an illustration. A moresatisfactory representation is found in the following very characteristic figure of an Irish piperof the sa ne reign, but of an earlier date, given in the rare illustrations of Derricks Imagea Catalogue of Stowe MSS. vol. i. p. 147. b In Aug. c. 68. c In Fastis, I. iv. v. 80-2.d Mr. Hardiman, who gives the song in his Minstrelsy, had it from a copy made in the year 1706. The airand name have unquestionably been plagiarized by our neighbours.C Aug. 2. 38.
issue Number
1
page Number
68
periodical Author
Edward Bunting
issue Publication Date
1840-01-01T00:00:00
allowedRoles
anonymous,guest,friend,member