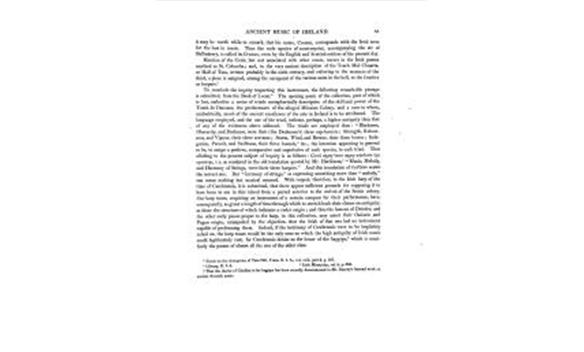 Previous | Next
Bunting - The Ancient Music of Ireland, Volume 1, Issue 1, Page 67
4 views
Favourite | Share | Feedback
periodical Publisher
Hodges & Smith, Dublin, 1840
periodical Editor
Edward Bunting
periodical Title
Bunting - The Ancient Music of Ireland
volume Number
1
issue Content
ANCIENT MUSIC OF IRELAND. 55it may be worth while to remark, that his name, Cronan, corresponds with the Irish termfor the bass in music. Thus the rude species of counterpoint, accompanying the air ofBallinderry, is called its &onan, even by the English and Scottish Settlers of the present day.Mention of the Cruit, but not associated with other music, occurs in the Irish poemsascribed to St. Columba; and, in the very ancient description of the Teach Mid Chuarta,or Hall of rfara, written probably in the sixth century, and referring to the manners of thethird, a place is assigned, among the occupants of the various seats in the hail, to the Gruitireor harpers.aTo conclude the inquiry respecting this instrument, the following remarkable passageis submitted, from the Book of Lecan.b The opening poem of the collection, part of whichis lost, embodies a series of triads metaphorically descriptive of the skill and power of theTuath de Da iaans, the predecessors of the alleged Milesian Colony, and a race to whom,undoubtedly, much of the ancient excellence of the arts in Ireland is to be attributed. Thelanguage employed, and the use of the triad, indicate, perhaps, a higher antiquity than that- of any of the evidences above adduced. The triads are employed thus : Blackness,Obscurity, and Darkness, were their (the Dedanaans) three cup-bearers; Strength, Robust-ness, and Vigour, their three servants; Storm, Wind, and Breeze, their three horses; Inda-gation, Pursuit, and Swiftness, their three hounds, &c., the intention appearing in generalto be, to assign a positive, comparative and superlative of each species, to each triad. Thatalluding to the present subject of inquiry is as follows: Ceot ct u binn a u ttbum rpcpulrlpl, i.e. as rendered in the old translation quoted by Mr. Hardilnan,c Music, Melody,and Harmony of Strings, were their three harpers. And this translation of rerbinu seemsthe correct one. But harmony of strings, as expressing something more than melody,can mean nothing but musical concord. With respect, therefore, to the Irish harp of thetime of Cambrensis, it is submitted, that there appear sufficient grounds for supposing it tohave been in use in this island from a period ai terior to the arrival of the Scotic colony.Our harp tunes, requiring an instrument of a certain compass for their perform anc.e, have,consequently, as great a length of time through which to stretch back their claims on antiquity,as those the structure of which indicates a ruder origin; and thus the lament of Deirdre, andthe other early pieces proper to the harp, in this collection, may assert their Ossianic ,andPagan origin, unimpeded by the objection, that the Irish of that ra had no instrumentcapable of performing them. Indeed, if the testimony of Cambrensis were to he implicitlyrelied on, the harp tunes would be the only ones on which the high antiquity of Irish musiccould legitimately rest, for Cambrensis denies us the honor of the bagpipe, which is mani-festly the parent of almost all the airs of the other class.a Petrie on the Antiquities of Tara Hill, Trans. H. 1. A., vol. xviii. part 2, p. 187.b Library, H. I. A. C Irish Minstrelsy, vol. ii. p. 353.d That the chorus of Giraldus is the bagpipe has been recently demonstrated in Mr. Dauneys learned work onancient Scottish music.
issue Number
1
page Number
67
periodical Author
Edward Bunting
issue Publication Date
1840-01-01T00:00:00
allowedRoles
anonymous,guest,friend,member