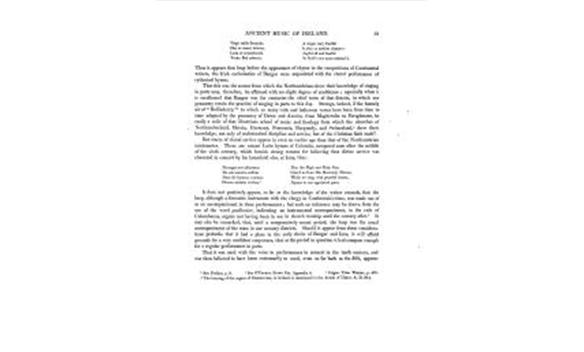 Previous | Next
Bunting - The Ancient Music of Ireland, Volume 1, Issue 1, Page 65
4 views
Favourite | Share | Feedback
periodical Publisher
Hodges & Smith, Dublin, 1840
periodical Editor
Edward Bunting
periodical Title
Bunting - The Ancient Music of Ireland
volume Number
1
issue Content
ANCIENT MUSIC OF IRELAND.53Virgo valde fmcunda A virgin very fruitfulHac et mater intacta, Is shea mother chasteL eta et tremebunda Joyful all and fearfulVerbo Dei subacta. In Gods own arms embracd.Thus it appears that long before the appearance of rhyme in the compositions of Continentalwriters, the Irish ecclesiastics of Bangor were acquainted with the choral performance ofrythmical hymns.That this was the source from which the Northumbrians drew their knowledge of singingin parts may, therefore, be affirmed with no slight degree of confidence; especially when itis recollected that Bangor was for centuries the chief town of that district, in which ourpeasantry retain the practice of singing in parts to this day. Strange, indeed, if the homelyair of Bal1inderry, a to which so many rude and ludicrous verses have been from time totime adapted by the peasantry of Down and Antrim, from Magheralin to Portglenone, bereally a relic of that illustrious school of music and theology from which the churches ofNorthumberland, Mercia, Germany, Franconia, Burgundy, and Switzerland,b drew theirknowledge, not only of ecclesiastical discipline and service, but of the Christian faith itself!But traces of choral service appear in even an earlier age than that of the Northuinbrianmissionaries. There are extant Latin hymns of Columba, composed soon after the middleof the sixth century, which furnish strong reasons for believing that divine service waschaunted. in concert by his household also, at lona, thusProtegat nos altissimus May the High and Holy OneDe suis sanctis sedibus Guard us from his Heavenly Throne,Dum ibi hymnos canimus While we sing, with grateful hearts,Decem statutis vicibus.e hymns in ten appointed parts.It does not positively appear, so fir as the knowledge of the writer extends, that theharp, although a favourite instrument with the clergy in Cambrensiss time, was made use ofas an accompaniment in these performances; but such an inference may be drawn from theuse of the word psalluntur, indicating an instrumental accompaniment, in the rule ofColumbanus, organs not having been in use in church worship until the century after. 5 Itmay also be remarked, that, until a comparatively recent period, the harp was the usualaccompaniment of the mass in our country districts. Should it appear from these considera-tions probable that it had a place in the early choirs of Bangor and Tona, it will affordgrounds for a very confident conjecture, that at the period in question it had compass enoughfor a regular performance in parts.That it was used with the voice in performances in concert in the tenth century, andwas then believed to have been customarily so used, even so far back as the fifth, appearsa See Preface, p. 8. b See OConnor, Stowe Cat. Appendix ii. Colgan. Trias. Thaum., p. 476.The burning of the organs of Cluaincrema, in Ireland, is mentioned in the Annals of Ulster, A. D. 814.
issue Number
1
page Number
65
periodical Author
Edward Bunting
issue Publication Date
1840-01-01T00:00:00
allowedRoles
anonymous,guest,friend,member