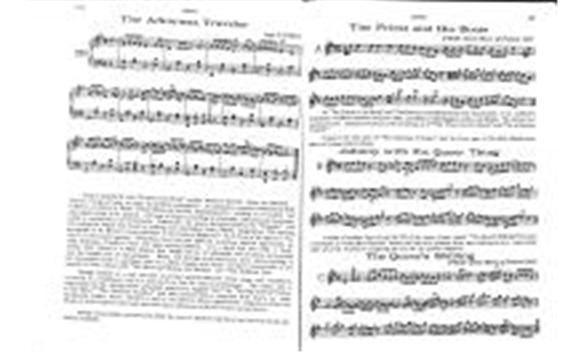 Previous | Next
O'Neill - Waifs and Strays of Gaelic Melody, Volume 1, Issue 1, Page 82
3 views
Favourite | Share | Feedback
periodical Publisher
1922
periodical Editor
O'Neill, Capt. Francis
periodical Title
O'Neill - Waifs and Strays of Gaelic Melody
volume Number
1
issue Content
13U255REELSThe Arkansas TravelerVying in popularity with Turkey in the Straw, another American favorite claims our attention.Famous in song and story its origin has baffled investigation An exhaustive research conducted by Dr.H.C. Mercer, an official of Bucks County Historical Society (Doylestown, Pa.) relating to its history andantecedents failed of its purpose. All lines of inquiry extending to Kentucky, Arkansas,and Louisiana,ended in contradiction and uncertainty. Futhermore; the quaint dialogue between the Traveler andthe backwoods fiddler was based on nothing more substaRtjal than fertile imagination. The Openingparagraph of Dr. Mercers essay published in the Century Magazine_. On the Track of the Arkans s Tra-veler is well worth quoting: Sometime about the year 1850 the American musical myth known asThe Arkansas Traveler came into vogue among fiddlers. It is a quick reel tune with a back-woods story talked to it while played, that caught the ear at sideshows and circuses, and soundedover the trodden turf of fair grounds. Bands and foreign -bred musicians were above noticing it,but the people loved it, an d kept time to it, while tramps and sailors carried it across seas to viemerrily in Irish cabins with The Wind that Shakes the Barley and The Soldiers Joy.Though classed as a reel, the tune as printed with Dr.Mercers clever essay and elsewhere,is scored as a buckdance, and in a key much too low for certain instruments The editor who isresponsible for the setting above presented ventures to suggest that like Old Zip CoonorTurkeyin the Straw The Arkansas Traveler had been evolved from a venerable Irish strain by somebackwoods fiddler whose identity is lost in the oblivion which engulfed the composers of the mul-titude of Irish melodies that have Survived many influences inimical to their preservationAmong the probable sources from which the tune in question may have been derived are the fol-lowing examples:AREELS 1 7The Priest and His BootsONeills Dcnu e Music of Jrela,nd. 1907V I I Irrrrrir jrr - l - !N: Ittrrrr1 rr sIi i tr-As The Priest in his Boots and The Parson in his Boots; this tune was printed in six differentCollections of Music between the years 1765, and 1809, at Edinburgh, London, and Dublin. The dullest earcan discern the similarity of strain in the second parts of The Priest and his Boots andThe ArkansasTraveler?Compare the first part of The Arkansas Traveler with the first part of No. 559, ONeill8 DanceJj sic of freland, which follows.BJohnny with the Qileer ThingI --rrfrrrrrlJJ JJI-Jirrrr r.l Lrr r rrrrrr1rrrIA study of another fine old reel No.752 of the same volume, named The Queen s Shillingbut knownin Scotland as ULady Mary Ramsay fosters the idea that perhaps there was nothing so very remarkableafter all in the Travelers completing the tune for the pioneer Paganini.The Q-ueens Shilling0 Neill Jk ce Music of Jrelanid. 1907ElC j II J J I rrrrrrr IJ r iI a 1P _ * ____r rIrrrrrrrr rr rI IILJ I LJ i: I Iti ri
issue Number
1
page Number
82
periodical Author
O'Neill, Capt. Francis
issue Publication Date
1980-01-01T00:00:00
allowedRoles
anonymous,guest,friend,member