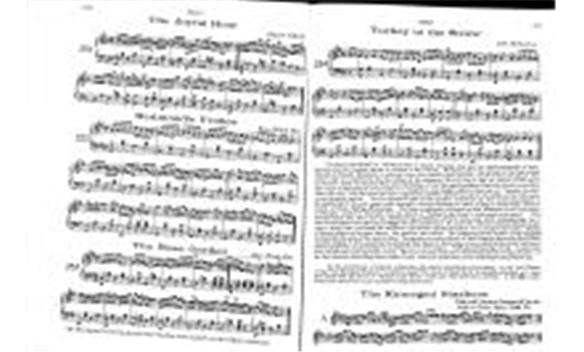 Previous | Next
O'Neill - Waifs and Strays of Gaelic Melody, Volume 1, Issue 1, Page 81
4 views
Favourite | Share | Feedback
periodical Publisher
1922
periodical Editor
O'Neill, Capt. Francis
periodical Title
O'Neill - Waifs and Strays of Gaelic Melody
volume Number
1
issue Content
135Ttirkey in the StrawJohn McFadden.___ J I I V i!J )J Jjjr 2 rrrUr rjrrrrrr rTurkey in the Straw; or Old Zip Coon as played nowadays may suit the rapid movements of buck-dancers, but the frenzied rhythm is ruinous to the melody. Rendered after the manner of the famous DanEmmett of Bryants Minstrels, Tt slow reel time, this popular tune acquires a much enhanced appeal. Em-mett, it will be remembered was the author of the immc rtal Dixie, and it was his version of Turkey inthe Straw which we obtained from John McFadden of the Chicago Irish Music Club,that is here presented.The origin of this favorite of our fathers is wrapped in even deeper mystery than that of Yankee Doodle.Under the title Old Zip Coon the tune appeared in Howes Qollections about the middle of the 19th centu-ry, and possibly e,arlier. The first gleam of light on the question of how the old title eventually yielded tothe popularity of the new name, came through a chance conversation while fishing in 1920 with a northerntourist at Ocean Spfings, Mississippi. The latter confidently informed me that Alderman Silas Leachmanof Chicago, a native of Kentucky was the author of Turkey in the Strawboth words and music! Themelody I knew was older than the Aldermans grandfather, yet here was a lead worth investigating, for itwas his melodious voice that first bro ight him into prominence. An interview with the talented official at Chi-cago a month later confirmed the statement that he was indeed the author of one song of that naniethebestof several others on the same theme. One question was settled. The popularity of the modern song relegatedto obscurity the name of the ancient tune. The pioneers or early ettlers of West Virginia,Kentucky,and Tennes-see,were largely of Irish ancestry, and obviously their music or tunes more or less varied by fancy,and defectivememorizing from one generation to another 2 were of Irish origin. Fiddling and dancing being inseparablefrom all festivities and important events, the tunes became much more diversified,but the swing and spirit ofthe Gael however was always discernable in their reels and quadrilles, and so continue to the present day.For the convenience of musical antiquaries who may be interested in the subject, an old Irish March,or Jig, The Kinnegad Slashers to which is sung The Land of Sweet Erin is herewith submitted as a tunefrom which Old Zip Coon or Turkey in the Straw could have been derived or evolved. A third art add-ed by later musicians is not essential in this illustration.The Kirmegad SlashersOFarreUs Pocket Compaiiio for theIrzeh or (Tn,1o-n Pz pes. 1804 -10.. ______________________ a . rI r U r i r#,-_ __. ,- __L___,pp134The Joyfui HourCapt. F. ONejij.REELSV254aI -J L _ i j __ Ja aThe Rose Garden is entirely distinct from The Rose in the Garden in former ONeill Collections.A_t i. &
issue Number
1
page Number
81
periodical Author
O'Neill, Capt. Francis
issue Publication Date
1980-01-01T00:00:00
allowedRoles
anonymous,guest,friend,member