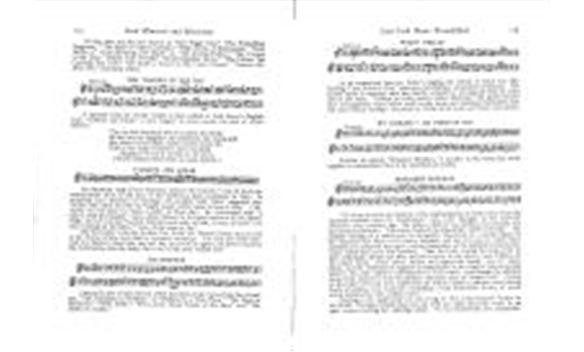 Previous | Next
O'Neill - Irish Minstrels and Musicians, Volume 1, Issue 1, Page 58
1 views
Favourite | Share | Feedback
periodical Publisher
Regan Printing House, Chicago, 1913
periodical Editor
[none]
periodical Title
O'Neill - Irish Minstrels and Musicians
volume Number
1
issue Content
114 Iris/i .LV [ instrels and l/ [ usiciansOf this class are the airs known as The Foggy Dew, The EnniskillenDragoons, The Maid of Sweet Gurteen, Billy Byrne of Ballymanus, IrishMolly 0, Good Morning, Fair Maid; or, The Roving Pedlar, The Tossingof the Hay, Father Tom ONeill, Sweet Beaulien Grove, The Colleen ImCourting Just Now, Ill Build a Tower in My Loves Breast, Searnus MoMile Stor, and many others.ModerateTHE TOSSING OF TEE HAY i__i. -t)A typically Irish air of this variety is that wedded to John Parrys Englishlyric, Vilikins and Dinah, a love tragedy in seven verses, the first of whichfollows:Tis of a rich merchant who in London did dwell;He had but one daughter, an unkimmon nice young gall;Her name it was Dinah, scarce sixteen years old,\Vith a very large fortune in silver and gold.Singing to Ia lol Ia ral lall to ral lal la.(Chorus repeats three times to same melody.)VILIKINS AND ,J INAH_____ 3- Iii I JI,IIIIIr_iI_H_ l yplAn American song of love betrayed, named Joe flowers, was set to an airunmistakably Irish, in the days of the California gold excitement in 1849. Inaccepting Joes proposal of marriage, the prudent Sally Black suggested thatbefore they hitch for life he ought to get a little home to keep a wife. Cali-fornia was the place to raise a stake in those days. So, encouraged with akiss to hind the bargain, and a dozen thrown in for good measure by the liberalSally, Joe set out and worked both late and early in rain, in sun, in snow; hewas working for his Sally, twas all the same to Joe.The first letter from his brother Ike, in the old Missouri home, put an endto his dream of bliss and faith in womans constancy. Not only was Sally mar-ried to a butcher whose hair was red, but, to crown his agony, the letter conveyedthe information that the babys hair was of the same radiant hue!JOE BOWERS__________________ I .r - Il Among the airs of this class in which the third strain varies from the secondare, The Lowlands -of Holland, or 1-Tolland Is a Fine Place, The Boys ofWexford, Willy Reilly, The Lovely Sweet Banks of the Suir, and TheBanks of Claudy.ModerateIrish Folk Music ExemplifiedWILLY REILLY . 5An air memorized from my fathers singing, the refrain of which was MyDarling, I am Fond of You, possesses peculiarities somewhat exceptional. Thesecond strain is repeated after the fourth, evidently to correspond with an extraline in the verse. Perhaps no Irish melody better illustrates the placid succes-sion of lengthened tones which swell on the sense and insinuate themselves intoour most inmost feelings described by Webb in his work on Poetry and Music.MY DARLING I AM FOND OF YOUTenderlVAnother air named, Margaret Sheehan, is peculiar in the sense that whileregular in composition there is no repetition of strains.MARGARET SHEEHAN, . Very slowVV -If we are to form our opinion of the original genius of Irish music from theaccounts handed down by Cambrensis, says Lady Morgan, in her PatrioticSketches, over a century ago, the pathos w-hich it now betrays was certainly notits primeval character. But music feedeth the disposition which it tiudeth. Thepopular feelings of a nation may be frequently discovered to a certain degree inthe character and idiom of its native melodies, and the very key in which thesemelodies are composed may give a rehned intimation of the political circumstancesunder which they were first breathed. Thus the Irish, during the long series oftheir sufferings, effused not their tuneful sorrows in the cheery, open fullness ofthe major mood. Their voices, broken and suppressed faintly, rose by minorthirds, and the sentiment of anguish communicated to the song of the persecutedhard by his souls sadness still breathes in Irish music, even though the efficientcause from whence it stole its plaintive character may no longer exist. Hencewe find that even the most rapid Irish air will he found to contain some lurkingshade of pathos, even to possess something of that melancholy luxury of soundwhich characterizes the Arabian music.Passing a ver small rustic cot near Cong. in i 817. John llernard Trotter, inhis Walks Through Ireland, heard an old Irish air sung with Irish words 1w anaged woman turning her spinning wheel. Tt was mournfully anti remarkably
issue Number
1
page Number
58
periodical Author
O'Neill, Capt. Francis
issue Publication Date
1913-01-01T00:00:00
allowedRoles
anonymous,guest,friend,member