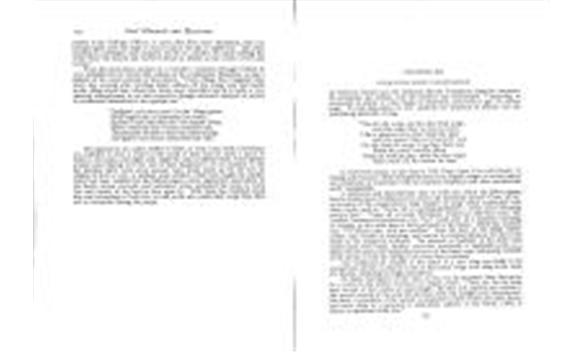 Previous | Next
O'Neill - Irish Minstrels and Musicians, Volume 1, Issue 1, Page 57
1 views
Favourite | Share | Feedback
periodical Publisher
Regan Printing House, Chicago, 1913
periodical Editor
[none]
periodical Title
O'Neill - Irish Minstrels and Musicians
volume Number
1
issue Content
112Irish ] Iinstrels and Musiciansmother in the Half-pay Officcrs, in 1720, after fifty years retirement, she wasbrought again upon the stage to dance a jig at the age of eighty-five. She cametottering in, seemingly much fatigued, but all on a sudden, the music striking theIrish Trot, she danced and footed it almost as nimbly as any wench of five andtwenty.From the anonymous account of a travelers excursion through Ireland in1751, published in the twenty-first volume of the Gentlemans Magazine, we get aglimpse of the social customs of that period. Every village has a bagpiper whoevery fine evening after working hours collects all the young men and maidsin the village about him, where they dance most cheerfully, and it is really a verypleasing entertainment to see the expressive though awkward attempts of natureto recommend themselves to the opposite sex.Twilights soft dews steal oer the village greenWith magic tints to harmonize the scene;Hushed is the hum that thro the hamlet broke,When round the rim of some venerable oakThe peasants flocked to hear the minstrel play,And games and dances closed the busy day.The appearance of a piper, fiddler or fluter, or even a man with a jews-harp,was sufficient to draw a crowd of the youth of both sexes to enjoy a dance orlisten to the music; and night after night the same youthful hearts would gatheraround some blazing turf fire, and if there happened to be no musician to stirthe dancing spirit, some sweet peasant voice would make up for the loss bysinging of love or war, or perhaps some incident which had caught the popularf ncy and been versified for the ballad-singersthose degenerate descendants ofthe bardswhose powerful and melodious voices enlivened the scene at everyfair and market in the land in days gone by. With them has vanished muchthat was interesting in Irish life, as well as the airs which their songs kept aliveand in circulation among the people.CHAPTER XIIIRISH FOLK MUSIC EXEMPLIFIEDAs CROFTON CROKER says, the Irishman, like the Frenchman, sings his conquests,his prosperity, his defeats, even his miseries and misfortunes. Conquering orconquered, in plenty or want, happy or distressed, sorrowful or gay, he alwayssings. To this disposition we may attribute our treasures of melody and ourbewildering plenitude of song.The old, old songs, and the dear dead songs,And the songs that we hear no more,Like a phantom race, they haunt the placeAnd the scenes that were loved of yore.Oh, the dear old songs, I can hear them yet,When the weary worlds asleepNeath its comfort gray, with the stars alwayTheir ward oer its dreams do keep.Tn Irish Folk Songs, no less than in Folk Music, there is an individuality offeeling and character which distinguish them from English songsa certain humorand quaintness of expression with an exquisite simplicity and other peculiaritieseasily recognizable.A numerous and characteristic class of Irish airs which the ballad-singerskept in promiscuous circulation have come to be facetiously termed Come, all ye,on account of the comparatively large number of songs which commenced withthese words, such as, Come. all ye sporting gentlemen; Come, all ye bloomingcountry lads; Come, all ye tender Christians; I hope you will draw near, etc.Another hackneyed introduction was, As I roved out on a summers morning,or evening, or any other time or date pertinent to the theme. Much less commonwas, Ye Muses nine, with me combine, since the days of the hedge school-master, who reveled in mythology and soared in classical allusions far above theheads of his unlettered audience. The minstrel or balladist of the olden timeseized upon every battle, murder, execution, wonderful or laughable event, as atheme for his muse, and, being the purveyor of the latest news and gossip availablein his circuit as well, his coming was everywhere welcomed.Any traditional air suitable to the metre of a new song was liable to bepressed into service; so that in course of time many songs were sung to the sameair, thereby confusing its origin and history.No better description of this class of airs can be presented than that givenby a writer in the Dublin Examiner of August, i8 i6: They are for the mostpart formed of four strains of equal lengththe first soft, pathetic and subduei;the second ascends in the scale and becomes bold and energetic and impassioned;the third, a repetition of the second, is sometimes a little varied and more florid,and leads often by a graceful or melancholy cadence to the fourth, which isalways a repetition of the first.113
issue Number
1
page Number
57
periodical Author
O'Neill, Capt. Francis
issue Publication Date
1913-01-01T00:00:00
allowedRoles
anonymous,guest,friend,member