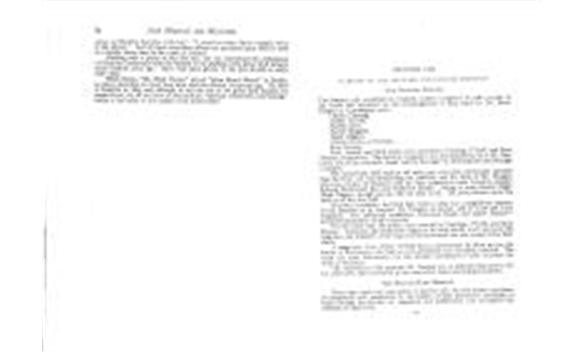 Previous | Next
O'Neill - Irish Minstrels and Musicians, Volume 1, Issue 1, Page 42
1 views
Favourite | Share | Feedback
periodical Publisher
Regan Printing House, Chicago, 1913
periodical Editor
[none]
periodical Title
O'Neill - Irish Minstrels and Musicians
volume Number
1
issue Content
82 Iris/i Minstrels and Musiciansaway, as Sheridan Knowles would say: A sound so faint, theres naught twixtit and silence. And all these marvelous -effects are produced upon what is usedas a simple dance tune in the south of Ireland.Hearing such a player at this late day, one can understand the enthusiasmof Giraldus Cambrensis when he listened to the playing of the great Irish harpersseven hundred years ago. Alas! that those glories of the past should so easilyfade away.When Byrne, The Blind Harper played Brian Borus March in Dublin,as above described, he must have been past the allotted Scriptural age. He diedat Dundalk in 1863, and although he was the last of the great Irish harpers, hepassed away, for all we know to the contrary, unwept, unhonored, and unsung,within a few miles of the capital of his native land!CHAPTER VIIIIIARI ERS AT TilE (;R-\N\RI) AND L ELFAST MEETINI;sTIlE GRANARD MEETINGTHE harpers who assembled at Granard, County Longford, in 1781, to play atthe Grand Ball instituted for the encouragement of harp music by Mr. JamesDungan of Copenhagen, were:Charles Fanning,Arthur ONeill,Patrick Kerr,Patrick Maguire,Hugh 1-liggins,Charles Byrne, or Berreen,Rose Mooney.First, second, and third prizes were awarded to Fanning, ONeill, and RoseMooney, respectively. The decision, it appears, was not unanimous, for a Mr. Bur-rowes, one of the stewards, found vent for his anger by thrusting his cane througha window.The second ball, held early in the next year, was more numerously attendedthan the first; yet notwithstanding the publicity, and the fame of Mr. Dungan,who was a native of Granard, only two new competitors came forwardnamely,Edward McDermott Roe and Catherine Martin. Owing to some fancied slight,Hugh Higgins, though present, did not play at all. The prize-winners were thesame as at the first ball.In point of numbers, the third ball, held in 1783, was a magnificent success.It was attended by its founder, Mr. Dungan, in person, and by Lord and LadyLongford. Two additional candidatesLawrence Keane and James Duncanpresented themselves on this occasion.For the third time the prizes were awarded to Fanning, ONeill, and RoseMooney. jealousies and animosities began to do their deadly work, and even theoriginator and financier of the harp revival movement was not exempt from theirshafts.A suggestion from Arthur ONeill that a subscription be taken up for thebenefit of the harpers who had not won premiums was favorably received. Theresult was quite satisfactory, for the amount distributed to each exceeded thevalue of the prizes.The experience of the patriotic Mr. Dungan was so disheartening that lie didnot after\Vards interest himself in the renewal of those interesting assemblies.THE BELFAST HARP MEETINGEvery ageand every generation. it may be said, for that matterproducesits enthusiasts who, undeterred by the failure of their precursors. undertake tobreak through the barriers of tagnation and indifference, and accomplish theambition of their lives.83
issue Number
1
page Number
42
periodical Author
O'Neill, Capt. Francis
issue Publication Date
1913-01-01T00:00:00
allowedRoles
anonymous,guest,friend,member