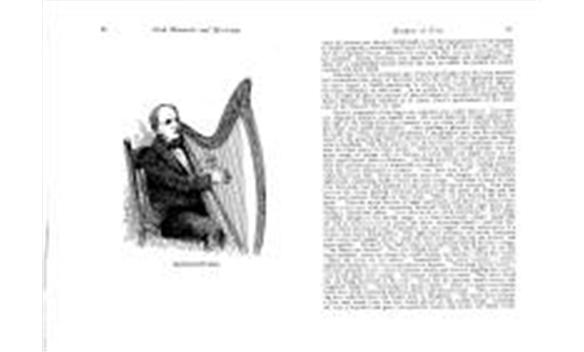 Previous | Next
O'Neill - Irish Minstrels and Musicians, Volume 1, Issue 1, Page 41
1 views
Favourite | Share | Feedback
periodical Publisher
Regan Printing House, Chicago, 1913
periodical Editor
[none]
periodical Title
O'Neill - Irish Minstrels and Musicians
volume Number
1
issue Content
8o - Irish Minstrels and MusiciansHarpers of Note 8iwhen his picture was taken at Edinburgh, in the flowing garments of the harpersof earlier centuries, according to Bruce Armstrong, in his great work, The Irishand the I-Jiqhland Harps, published in 1904. hut that was an overestimate, weare satisfied. Byrne, however, had played in Edinburgh and throughout Fife-shire for a considerable period before the date on which his picture in ancientcostume had been taken.Although from his estimated age, Armstrong thought that the Irish minstrelhad commenced the study of the harp before the end of the eighteenth century,we must regard a Dublin gentleman in whose house Byrne played in i86o asthe better authority on that point. In an article in The Emerald of New YorkCity, in 1870. he gives an account of the old minstrels manner of playing BrianBorus March, which reminds us of Owen Lloyds performance of the sametune at the Munster Fei , in 1906.Byrnes command of the harp was complete, the writer tells us. His touchwas singularly delicate, yet equally firm. He could make the strings whisper likethe sigh of the rising wind on a summer eve, or clang with a martial fiercenessthat made your pulses beat quicker. After quaffing a generous tumbler of punch,he would say, Now, ladies and gentlemen, I am going to play you the celebratedmarch of the great King Brian to the field of Clontarf, when he gave the Danessuch a drubbing. The Irish army is far off, but if you listen attentively you willhear the faint sound of their music. Then his fingers would wander over theupper range of strings with so delicate a touch that you might fancy it wasfairy music heard from a distance. Anything more fine, more soft and delicatethan this performance, it is impossible to conceive. They are coming nearer !And the sound increased in volume. Now here they are ! And the musicrolled loud and full. Thus the march went on: the fingers of the minstrelsright hand wandering farther clown the bass range. You find it hard to keepour feet quiet, and feel inclined to take part in the march yourself. You fancyvon see the troops dashing fearlessly onward with the great old King and thefierce and stalwart Morogh at their head. Hist! we are nearing the field ofbattle. Then the music became stronger and louder, and there is a deeper rum-bling of the bass, with an occasional harmonic third with the right hand, pro(lucing a remarkable effect. Now theyre at itIrish and Danes ! The musicsuddenly changes to the middle range : it is hard and harshclang ! clang! likethe fall of sword or axe on armor, the blows showering thickly; and that bar-lilonic third aforesand comes frequently. hut on a higher string, which gives it asterner and more fitting effect. The right hand produces an artistic confusionwith starts and rugged chords, while the left continues playing the melody, butmore quickly. Presently the right rushes clown pell-niell among the bass strings.The Danes are broken! They are falling back ! Then the fingers of the lefthand suddenly sweep up along the treble strings, producing a shriek-like sound.Thats the Irish cry of victory. Immediate 1 the music assumes a merry.lightsome character, as if it were played for dancers. Rejoicing for the victory.But this abruptly ceases : there is another shriek and discord, jangling and confu-sion in the upper bass strings. The harper explains as usual, They have foundthe old King murdered in his tent. Then the air becomes much slower andsingularly plaintive. Mourning for Brians death. There is a firmer and loudertouch now, with occasional plaintive effects with the left hand. They are march-ing now with the brave old Kings body to Droghecla. The music now assuniesa slow and steady tone, the tune being played on the middle range. Gracluallvthe tone is lowered, and grows momentarily louder and louder, till finall it (liesPAT CK BYRNE.
issue Number
1
page Number
41
periodical Author
O'Neill, Capt. Francis
issue Publication Date
1913-01-01T00:00:00
allowedRoles
anonymous,guest,friend,member