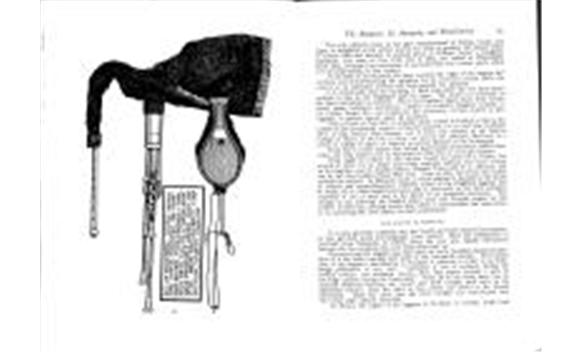 Previous | Next
O'Neill - Irish Minstrels and Musicians, Volume 1, Issue 1, Page 23
10 views
Favourite | Share | Feedback
periodical Publisher
Regan Printing House, Chicago, 1913
periodical Editor
[none]
periodical Title
O'Neill - Irish Minstrels and Musicians
volume Number
1
issue Content
The Bagpipe, Its Aijtiquity atid DistributionThe soft, plaintive tones of the pipes manufactured by Kenna, Coyne, anoLgan, so delightful in the parlor, proved too weak to produce the desired effectni concert halls and theatres of modern times, so \Villiarn Taylor, a Droghedapipemaker, who came to New York City in 1872, and settled in Philadelphiaabout 1874, developed an instrument of powerful tone and concert pitch, whichmet all requirements in that respect.As the limit of development had been reached, the vogue of the bagpipe haddeclined, and notwithstanding the agitation for its revival in recent years, theutlook to an enthusiast presents but little ground for optimism.It is unfortunate that the teaching of Irish pipe music has not been stand-ardized, as that on the Highland pipe has been. The system of execution onthe latter instrument is uniform ; and as all Highland pipers learn from writtenmusic, under competent instructors, whether in Scotland, England, Canada, orthe United States, they are enabled by the uniformity of their system to playtogether, in perfect accord, upon all occasions.That a school of Piob Mor or warpipe music existed in ireland as late as themiddle of the seventeenth century, is beyond que.stiOn for we find that Do;uhnallMor, or Big Donald MacCrimmon, son of John, the founder of the famousCollege of Pipers, in the Isle of Skye, was sent by his chieftain, MacLeod, to aschool or college of pipers in Ireland, to perfect himself on the instrument.From this it would appear that before government persecution chilled theirardor, the Irish pipers were as renowned in their line as were the harpers.What might be written on this subject would not alone fill a volume, butseveral of them, for in recent years three separate volumes have been writtenon the bagpipetwo by Scotch authors, Duncan Fraser and W. L. Manson, andone by our own Grattan Flood, Mus. Doe. Even so, they did not by any meansexhaust the subject. In Mansons work, a whole chapter is devoted to the shaftsat ridicule and uncomplimentary criticism aimed at the Highland bagpipe andits music, all of which might have been said as deservedly of the Irish warpipes,especially if out of tune, and in the hands of an incapable performer. Yet,strange to say, although the English pipers were also favorite targets for thescoffers in their day, nothing except that which is commendable has come downto us concerning the Irish pipers or their performance.THE BAGPIPE IN ScOTLAND.It is now generally admitted that the Scotch got their musical instruments,as they got their music and language, from Ireland. Since the colonization ofScotland from Dalaradia in Ulster, abotit the year 504, regular intercoursebetween the two countries has ever since been kept up.However long the bagpipe may have been in use in Scotland, historical men-tion of it had been wanting until early in the fourteenth century. The precisedate of the bagpipes introduction to Scotland is tmknown a writer in an Edin-burgh publication of 19!! says: Certainly it was in evidence during thetwelfth century, and authentic records show that pipers formed a part ofthe kings retinue during the fourteenth. From all we can learn there was noessential difference between the Scotch and Irish warpipe until early in theeighteenth century, when the third or bass drone was added to the Scotchinstrument. About the same time the Irish warpipe was transformed intothe Union pipes already described.To discuss the origin of the bagpipe in Scotland. or Ireland, would lead44
issue Number
1
page Number
23
periodical Author
O'Neill, Capt. Francis
issue Publication Date
1913-01-01T00:00:00
allowedRoles
anonymous,guest,friend,member