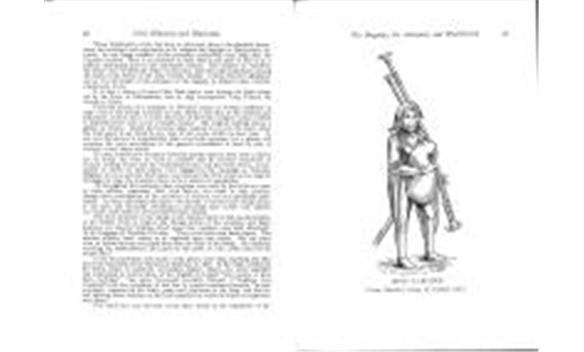 Previous | Next
O'Neill - Irish Minstrels and Musicians, Volume 1, Issue 1, Page 19
9 views
Favourite | Share | Feedback
periodical Publisher
Regan Printing House, Chicago, 1913
periodical Editor
[none]
periodical Title
O'Neill - Irish Minstrels and Musicians
volume Number
1
issue Content
36Iris / i Minstrels and MusiciansWhen Cambrensis wrote, the harp or clarseacli, always the glorified instru-ment, had attained such popularity as to relegate the bagpipe to comparative ob-scurity, its use being confined to the peasantry exclusively even long after theNorman invasion. There is no evidence to show that it was used in war or as amilitary instrument prior to the fourteenth century. The mention of Goeffreythe Piper and William the Piper in the years 12o6 and 1256 respectively, amongthe deeds of the Priory of the Holy Trinity, Dublin; (Christ Church Cathedral,)sets at rest all doubts of the existence of the bagpipe in Ireland when GiraldusCambrensis wrote.It is also a matter of record that Irish pipers were among the Irish troopsled by the Prior of Kilmamham, who in 1475 accompanied I\mg Edward theFourth to Calais.From the picture of a warpiper in Derricks Image of Ireland, published in58i, even if not strictly accurate, we may obtain a fair idea of the costume andinstrument of those times. A much finer type of the Irish warpiper is that creditedto Albrecht Durer early in the sixteenth century. The original painting adorns agallery in Vienna. Unlike the German piper painted in 1514 by the same artist.the Irish piper is not listed in any copy of his works which we have seen. Atany rate the picture is unmistakably that of an Irish \varpiper, for a glance willconvince the most incredulous of the general resemblance it bears to that inDerricks work above named.We may wonder how the great Bavarian painter came to meet such a subjectfor his brush, but when we come to consider that he traveled extensively inEurope, visiting Alsace and the Netherlands twice, and that Irish Kerns. accom-panied of course by their pipers were engaged in the campaign at Tournay,Belgium, in 1513, and that Irish pipers accompanied the Trish troops at the siege ofBoulogne in 1544, the question ceases to be a matter of speculation.All throughout the centuries when warpipes were used by the Irish as a partof their military equipment, little Irish history was made in their absence,though their participation in the activities of warfare was not specifically men-tioned. In forays and battles the pipers took literally a foremost part. bemg alwaysin the lead, and heroically remaining to encourage their troops with spiritedvar tunes, until death or defeat silenced their strains.The Irish advanced to the charge at the famous battle of Bel-anathabuidhe,or the Yellow Ford, in 1598 to the stirring strains of the warpipes, and manyinstances are cited by Grattan Flood where the warpipes were used effectively.In the language of Standish OGrady: They were brave men those pipers. Themodern military band retires as its regiment goes into action. But the pipervent on before his men and piped them into the thick of the battle. He advancedsounding his battle-pibroch, and stood in the ranks of war, while men fell allaround him.It was the patriotism and loyalty of the pipers, more than anything else thatled to the enactment of the Statutes of Kilkenny in 1367. Tn the reign of Edwardthe Third, pipers or minstrels, storytellers, bablers. rimers, etc., were attaintedand imprisoned as well as those of the English in Ireland who receive or givethem anything. One piper, Dowenalcl (probably Dhonal) OMoghane, wasexempted from the operations of this law by special enactment because he hadconstantly remained in the fealty, peace and obedience of the king; and that hehad inflicted divers injuries on the Irish enemies for which he durst not approachnear them.This harsh law was the first severe blow struck at the popularity of theIThe Bagpipe, its /lntiquity and DistributionIRISH \VARPIPER37/- - - - --------(From Derricks Image of Ireland. 1581.)
issue Number
1
page Number
19
periodical Author
O'Neill, Capt. Francis
issue Publication Date
1913-01-01T00:00:00
allowedRoles
anonymous,guest,friend,member