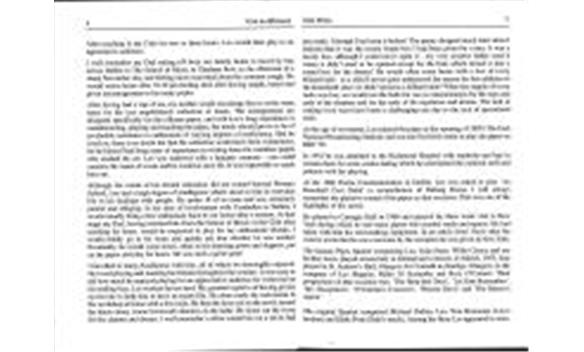 Previous | Next
Ceol na hÉireann / Irish Music, Volume 1, Issue 3, Page 7
1 views
Favourite | Share | Feedback
periodical Publisher
Na Píobairí Uilleann
periodical Editor
Chairman, NPU
periodical Title
Ceol na hÉireann / Irish Music
volume Number
1
issue Content
4Ceol na hEireann Irish Music5After teaching in the Club for two or three hours, Leo would then play to anappreciative audience.I well remember my Dad setting off from our family home to travel by busacross Dublin to The School of Music in Chatham Row, in the afternoon of adamp November day, and feeling most concerned about his constant cough. Hewould return home after 10.30 pm feeling tired after having taught, tuned andgiven encouragement to his many pupils.After having had a cup of tea, my mother would encourage him to write sometunes for his (yet unpublished) collection of music. The arrangements aredesigned specifically for the uilleann pipes, and with Leos long experience inmanufacturing, playing and teaching the pipes, the music should prove to be ofinvaluable assistance to enthusiasts of varying degrees of proficiency. Had helived on, there is no doubt but that the collection would have been voluminous,for he himself had long years of experience in writing tunes for countless pupilswho studied the art. Leo was endowed with a fantastic memory - one couldmention the name of a tune and he would at once lilt. It was impossible to catchhim out.Although the extent of his formal education did not extend beyond PrimarySchool, Leo had a high degree Qf intelligence which stood to him in everydaylife in his dealings with people. He spoke ill of no man and was extremelypatient and obliging. In my days of involvement with Comhalts in Dublin, Iwould usually bring a few enthusiasts back to our house after a session. At thatstage my Dad, having returned late from the School of Music or the Club afterteaching for hours, would be requested to play for my enthusiastic friends, Iwould boldly go to his room and quietly ask him whether he was awake!Eventually, he would come down, often in his dressing gown and slippers, puton the pipes and play for hours. He was such a great sport!I travelled to many fleadhanna with him, all of which we thoroughly enjoyed.He loved playing and meeting his friends throughout the country. It was easy totell how much he enjoyed playing for an appreciative audience for it showed onhis smiling face. Leo worked far too hard. My greatest regret is of having grownup too late to help him to have an easier life. He alone made the instrument inthe workshop at home with a few tools. He beat the keys out on the anvil; turnedthe black ebony (some boxwood) chanters on the lathe. He alone cut the ivoryfor the chanter and drones. I well remember a silver sound box on a set he hadjust made. I though I had seen it before! The penny dropped much later when Irealised that it was the rosary beads box I had been given by a nun. It was alovely box, although I could never open it - my very creative father used itwhere it didnt need to be opened except for the hole which turned it into asound box for the drones! He would often come home with a box of ivorybilliard balls - as a child I never quite understood the reason for this addition tothe household since we didnt possess a billiard table! When the supply of ivorytusks was low, we would cut the balls for use as ornamentation for the tops andends of the chanters and for the ends of the regulators and drones. The task ofcutting ivory must have been a challenging one due to the lack of specialisedtools.At the age of seventeen, Leo played the pipes at the opening of 2RN (The IrishNational Broadcasting Station) and was the first Irish Artist to play the pipes onBBCTV.In 1952 he was admitted to the Richmond Hospital with nephritis and had toremain there for some weeks during which he entertained the medical staff andpatients with his playing.At the 1966 Pearse Commemoration in Dublin, Leo was asked to play AnBuachaill Caol Dubh in remembrance of Pdraig Pearse. I will alwaysremember the plaintive sound of his pipes on that occasion. That was one of thehighlights of his career.He played in Carnegie Hall in 1968 and enjoyed his three week visit to NewYork during which he met many pipers who needed reeds and repairs. He hadtaken with him his reed-making equipment. In an article from Treoir after hisvisit he wrote that he was overcome by the reception he was given in New York.The famous Pipes Quartet comprising Leo, Sean Seery, Willie Clancy and mybrother Leon, played extensively in Ireland and overseas. In March, 1953, theyplayed in St. Andrews Hall, Glasgow for Conradh na Gaeilge, Glasgow, in thecompany of Leo Maguire, Mire NI Scolaidhe and Rory OConnor. Theirprogramme on that occasion was: The Harp that Once, Let Erin Remember,Mo Theaghiach, 0 Carolans Concerto, Planxty Davis and The MasonsApron.The original Quartet comprised Michael Padian, Leo, Tom Rowsome (Leosbrother) and Eddie Potts (Seans uncle). Among the films Leo appeared in were,V
issue Number
3
page Number
7
periodical Author
[Various]
issue Publication Date
2001-01-01T00:00:00
allowedRoles
anonymous,guest,friend,member