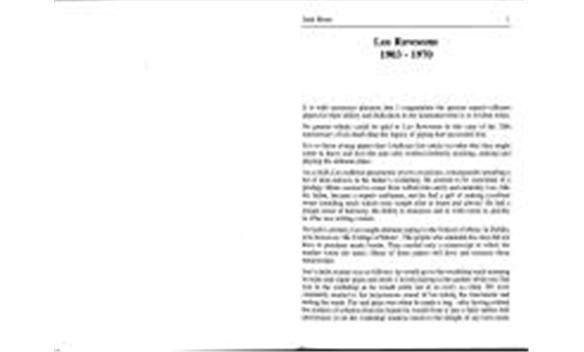 Previous | Next
Ceol na hÉireann / Irish Music, Volume 1, Issue 3, Page 5
1 views
Favourite | Share | Feedback
periodical Publisher
Na Píobairí Uilleann
periodical Editor
Chairman, NPU
periodical Title
Ceol na hÉireann / Irish Music
volume Number
1
issue Content
Irish Music 1Leo Rowsome1903 - 1970It is with enormous pleasure that I congratulate the present superb uilleannpipers for their ability and dedication to the instrument that is so evident today.No greater tribute could be paid to Leo Rowsome in this year of the 30thanniversary of his death than the legacy of piping that succeeded him.It is to those young pipers that I dedicate this article in order that they mightcome to know and love the man who worked tirelessly teaching, making andplaying the uilleann pipes.As a child, Leo suffered pneumonia on two occasions, consequently spending alot of time indoors in his fathers workshop. He seemed to be somewhat of aprodigy. Music seemed to come from within him easily and naturally. Leo, likehis father, became a superb craftsman, and he had a gift of making excellentsweet sounding reeds which were sought after at home and abroad. He had aunique sense of hannony, the ability to transpose and to write tunes as quicklyas if he was writing a letter.For half a century, Leo taught uilleann piping in the School of Music in Dublin,now known as the College of Music. The pupils who attended his class did nothave to purchase music books. They needed only a manuscript in which theteacher wrote the tunes. Many of these pipers still have and treasure thosemanuscripts.Leos daily routine was as follows: he would go to the workshop each morningto make and repair pipes and reeds. I loved playing in the garden while my Dadwas in the workshop as he would smile out at us every so often. We wereconstantly treated to the hannonious sound of his tuning the instrument andtesting the reeds. The real prize was when he made a bag - after having rubbedthe residue of solution from his hands he would form it into a little rubber bailand bounce it out the workshop window much to the delight of my twin sisterF
issue Number
3
page Number
5
periodical Author
[Various]
issue Publication Date
2001-01-01T00:00:00
allowedRoles
anonymous,guest,friend,member