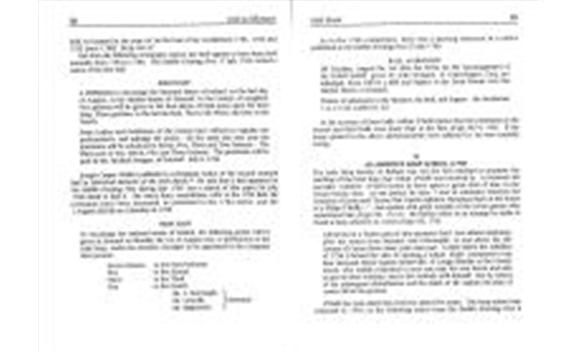 Previous | Next
Ceol na hÉireann / Irish Music, Volume 1, Issue 1, Page 19
6 views
Favourite | Share | Feedback
periodical Publisher
Na Píobairí Uilleann
periodical Editor
Chairman, NPU
periodical Title
Ceol na hÉireann / Irish Music
volume Number
1
issue Content
28Ceol na hEireann Irish Music29held at Granard in the years of (to the best of my recollection) 178 1, 1782 and1783 [ recte 17851 (IIpp.l62-4).But from the following newspaper-notices the balls appear to have been heldannually from 1784 to 1786. The Dublin Evening Post 17 July 1784 carried anotice of the first ball.IRISH HARPA PREMIUM to encourage the National Music of Ireland, on the last dayof August, at the Market-house of Granard, in the County of Longford:Five guineas will be given to the best player of Irish tunes upon the IrishHarp, Three guineas, to the Second best, Two to the Third, and One to theFourth.Some Ladies and Gentlemen of the County have offered to regulate theperformances, and adjudge the prizes.- On the same day next year thepremiums will be advanced to Seven, Five, Three and Two Guineas: - TheThird year to Ten, Seven, Five and Three Guineas. The premiums will bepaid by Mr. Michael Dungan, of Granard. July 8, 1784Joseph Cooper Walker published a newspaper-notice of the second GranardBall in Historical Memoirs of the Irish Bards.25 He said that it had appeared inthe Dublin Evening Post during July 1785, but a search of that paper for July1785 failed to find it. The notice does, nonetheless, refer to the 1785 Ball: thepremiums have been increased, as promised in the 1784 notice, and the1 August did fall on a Monday in 1785.IRISH HARPTo encourage the national music of Ireland, the following prizes will begiven at Granard on Monday the 1St of August next, to performers on theIrish Harp, under the decision of Judges to be appointed by the Companythen present.- to the best Performer- to the Second- to the Third- to the FourthMr. A. BurroughsMr. ConnellyMr. EdgeworthAs to the 1786 competition, there was a passing reference in a noticepublished in the Dublin Evening Post 27 July 1786:BALL, at GRANARDON Tuesday, August the 1st, after the Prizes for the encouragement ofthe IRISH HARP, given by John Dungan, of Copenhagen, Esq; areadjudged, there will be a Ball and Supper in the Great Rooms over theMarket House, in Granard.Tickets of admission to the Harpers, the Ball, and Supper - the Gentlemenus. 4 1!2d. Ladies 5s. 5d.In his account of these balls Arthur ONeill claims that the premiums at thesecond and third balls were lower than at the first (II pp.163-4, 169). If theterms quoted in the above advertisements were adhered to, he was certainlywrong.V IAN ABORTIVE HARP-SCHOOL (1793)The Irish Harp Society in Belfast was not the first attempt to promote theteaching of the Irish harp that Arthur ONeill was involved in. In between hissporadic rambles, ONeill seems to have spent a great deal of time in theCavan-Tyrofle area. At one period, he says, I was so stationary between theCounties of Cavan and Tyrone that I spent eighteen Christmas Days at the houseof a Philip OReilly... , and speaks with great warmth of the Cavan gentry whoentertained him (II pp. 1 54, 172-3). He further refers to an attempt he made tofound a harp-school in co. Cavan (II pp.162, 170):I observed in a former part of this narrative that I was almost stationaryafter my return from Munster and Connaught, in and about the theCounty of Cavan these many years last past. A little before the rebellionof 1798 I formed the idea of opening a school, which I proposed to mydear deceased friend Captain Somerville, of Lough Sheelin in the CountyCavan, who readily consented to erect one near his own house and alsoto get me three scholars, and to live entirely with himself. But by meansof the subsequent disturbances and the death of the captain the plan ofcourse fell to the ground.ONeill has post-dated this event by about five years. The harp-school wasproposed in 1793, as the following notice from the Dublin Evening Post 8Seven GuineasFiveThreeTwoStewards
issue Number
1
page Number
19
periodical Author
[Various]
issue Publication Date
1993-01-01T00:00:00
allowedRoles
anonymous,guest,friend,member