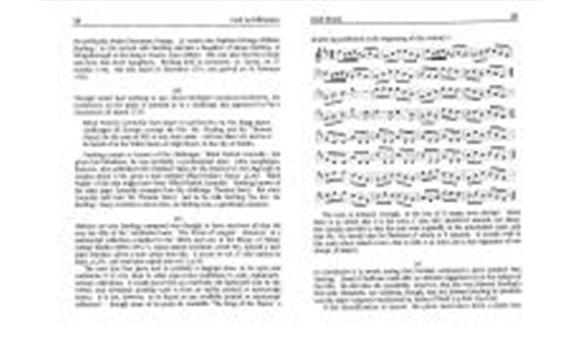 Previous | Next
Ceol na hÉireann / Irish Music, Volume 1, Issue 1, Page 17
6 views
Favourite | Share | Feedback
periodical Publisher
Na Píobairí Uilleann
periodical Editor
Chairman, NPU
periodical Title
Ceol na hÉireann / Irish Music
volume Number
1
issue Content
24Ceol na htireannIrish Music25the politically-loaded forename Orange. (A cousin was baptised Orange WilliamSterling.) As his second wife Sterling married a daughter of James Sterling, ofWhigsborough in the Kings County (now Offaly). She was also his first cousinand bore him three daughters. Sterling died at Garryross, co. Cavan, on 27October 1762. His will, dated 31 December 1751, was proved on 16 February1763.(iii)Though Leslie had nothing to say about Sterlings musical proclivities, hisproficiency on the pipes is attested to in a challenge that appeared in Pue SOccurences 29 March 1735:Blind Patrick Connolly that plays to perfection on the Bagg pipes,challenges all Europe (except the Rev. Mr. Sterling and Mr. ThomasDarcy) for the sum of 50!, or any sum under - not less than 10!, and is tobe heard of at the White Swan on High Street, in the City of Dublin.Nothing certain is known of the challenger, Blind Patrick Connolly; butgiven his blindness, he was probably a professional piper. John Geoghegan,however, who published The Compleat Tutor/or the Pastoral or new Bag-pipe atLondon about 1746, gives a tune entitled Blind Paddys Fancy (p.20). BlindPaddy of the title might have been Blind Patrick Connolly. Nothing known ofthe other piper Connolly exempts from his challenge: Thomas Darcy. But sinceConnolly calls him Mr Thomas Darcy, just as he calls Sterling the Rev. MrSterling, Darcy is likely to have been, as Sterling was, a gentleman amateur.(iv)Hitherto no tune Sterling composed was thought to have survived: all that didwas the title of his celebrated tune, The Priest of Lurgan. However, in amanuscript collection compiled in the 1 860s and now in the library of TrinityCollege Dublin (MSS 3194-7), Canon James Goodman (1828-96), himself a laterpiper-minister, gives a tune under that title. It occurs in vol. IV (the earliest indate), p.241, and was later copied into vol. I, p.50.The tune has four parts and is certainly a bagpipe-tune: in its style andvariations it is very close to other pipe-tunes published in early eighteenth-century collections. It would have been an extremely old-fashioned tune by the1860s, and Goodman possibly took it from an earlier printed or manuscriptsource. It is not, however, to be found in any available printed or manuscriptcollection2l - though some of its parts do resemble The King of the Pipers, aL LLThe tune is notated, wrongly, in the key of D major (two sharps). Sincethere is no doubt that G is the tonic, C (the 4th) should be natural, not sharp.But equally possible is that the tune was originally in the mixolydian scale, andthat the 7th should also be flattened (F sharp to F natural). It sounds well inthis scale when raised a tone, that is with A as tonic and a key-signature of twosharps (D Major).(v)In conclusion it is worth noting that Carolan composed a piece entitled MrsSterling. Donal OSullivan could offer no definite suggestion as to the subject ofthe title. He did raise the possibility, however, that she was Edward Sterlingsfirst wife, Elizabeth, not realising, though, that the Edward Sterling in questionwas the piper-composer mentioned by Arthur ONeill (I p.250, II p.104).If the identification is correct, the piece must have been a fairly latedouble-jig published at the beginning of this century. 22L
issue Number
1
page Number
17
periodical Author
[Various]
issue Publication Date
1993-01-01T00:00:00
allowedRoles
anonymous,guest,friend,member