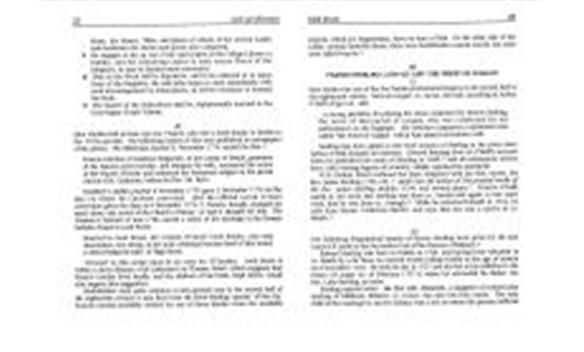 Previous | Next
Ceol na hÉireann / Irish Music, Volume 1, Issue 1, Page 16
6 views
Favourite | Share | Feedback
periodical Publisher
Na Píobairí Uilleann
periodical Editor
Chairman, NPU
periodical Title
Ceol na hÉireann / Irish Music
volume Number
1
issue Content
22Ceol na hEireann Irish Music23Music, the Names, Titles, and places of Abode of the several Ladiesand Gentlemen for whom such pieces were composed.II He engages to lay up one of the said Copies in the college Library inDublin, and the remaining Copies in such secure Places of theKingdom, as may be deemed most convenient.III That as the Work will be Expensive, and to be collected in so manyParts of the Kingdom, the said John hopes to meet immediately withsuch Encouragement by Subscription, as will be necessary to forwardthe Work.IV The Names of the Subscribers shall be Alphabetically inserted in thefront Pages of each Volume.(ii)John Carolan had at least one son, Francis, who was a book-binder in Dublin inthe 1770s and 80s. The following notices of him were published in newspapersof the period. The Hibern Ian Journal 21 November 1774 carried the first.1 2Francis Carrolan of Castleton Kilpatrick, in the county of Meath, grandsonof the famous poet Carrolan, and Margery his wife, renounced the errorsof the Church of Rome and embraced the Protestant religion in the parishchurch of St. Catherine, before the Rev. Mr. Byrn.Faulkners Dublin Journal 8 November 1774 gave 2 November 1774 as thedate on which the Carolans converted. (But the official record of theirconversion gives the date as 4 November 1774.13) Francis, though, changed hismind about the errors of the Church of Rome, or had it changed for him. TheFreemans Journal 10 June 1786 carried a notice of his marriage in the RomanCatholic chapel in Cook Street.Married in Cook Street, Mr. Francis OCarrol, book-binder, (the onlydescendant, now living, of the truly celebrated ancient bard of that name)to Miss Bridget MCabe, of High Street.OCarrol in this notice must be an error for OCarolan. Cook Street iswithin a short distance of St Catherines in Thomas Street, which suggests thatFrancis Carolan lived locally, and the address of his bride, High Street, wouldalso support this suggestion.Bookbinders were quite common in this general area in the second half ofthe eighteenth century; it may have been the book-binding quarter of the city.Francis Carolan probably worked for one of these binders since the availablerecords, which are fragmentary, have no trace of him. On the other side of theLiffey, around Sackville Street, there were bookbinders named Carroll, but nonewere called Francis. 14IIIPARSON STERLING (1706-62) AND THE PRIEST OF LURGAN(i)Kate Martin was one of the few female professional harpers in the second half ofthe eighteenth century. Born in Lurgan, co. Cavan, she had, according to ArthurONeill (II pp.164, 182),.a strong partiality for playing the tunes composed by Parson Sterling,the rector of that parish of Lurgan, who was celebrated for hisperformance on the bagpipes. The minister composed a celebrated tunecalled The Priest of Lurgan, which Kate played uncommon well.Nothing has been added to this brief account of Sterling in the years sinceArthur ONeill dictated his memoirs. Edward Bunting drew on ONeills accountwhen he published his notice of Sterling in 1840,15 and all subsequent writershave, with varying degrees of accuracy, simply repeated his statement.W H Grattan Flood confused the piper-composer with his first cousin, theRev. James Sterling (1701-63) 16 James was the author of The poetical works ofthe Rev. James Sterling (Dublin 1734) and several plays.1 7 Francis ONeillstated in one work that Sterling was from co. Antrim and again, in the samework, that he was from co. Armagh.18 While he corrected himself in 1912, hecalls Kate Martin Catherine Martin and says that she was a native of co.Meath.19(ii)The following biographical details of Parson Sterling were given by the lateCanon J B Leslie in his Succession List of the Diocese of Kilmore. 2 Edward Sterling was born in Dublin in 1706, and having been educated inco. Meath by a Mr Ross, he entered Trinity College Dublin at the age of sixteenon 8 November 1722. He took his BA in 1727 and his MA at his collation to theUnion of Lurgan on 18 February 1737-8, where he succeeded his father, theRev. Luke Sterling, as rector.Sterling married twice. His first wife, Elizabeth, a daughter of Colonel JohnSterling of Kihlikeen, Kilmore, co. Cavan, was also his first cousin. The onlychild of the marriage to survive infancy was a son on whom his parents inflicted
issue Number
1
page Number
16
periodical Author
[Various]
issue Publication Date
1993-01-01T00:00:00
allowedRoles
anonymous,guest,friend,member