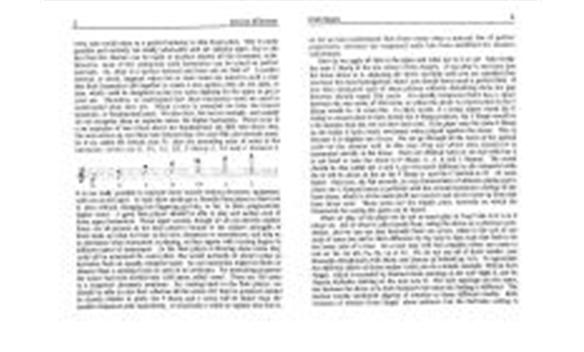 Previous | Next
Ceol na hÉireann / Irish Music, Volume 1, Issue 1, Page 6
8 views
Favourite | Share | Feedback
periodical Publisher
Na Píobairí Uilleann
periodical Editor
Chairman, NPU
periodical Title
Ceol na hÉireann / Irish Music
volume Number
1
issue Content
2Ceol na hEireann Irish Music3every note could relate as a perfect harmony to that drone pitch. This is rarelypossible and certainly not totally achievable with the uilleann pipes, due to thefact that the chanter can be made to produce almost all the chromatic scale.However, most of the commonly used harmonies can be tuned as perfectintervals. So, what is a perfect interval and how can we find it? A perfectinterval, or chord, happens when two or more notes are tuned in such a waythat their harmonics add together to create a new pattern, they do not clash, orbeat, which could be imagined as the two notes fighting for the space to get toyour ear. Therefore, to understand how these harmonics work we need tounderstand what they are. When a note is sounded we hear the lowestharmonic, or fundamental pitch. We also hear, but not so strongly, and usuallydo not recognise them as separate notes, the higher harmonics. These occur ina set sequence of one octave above the fundamental, the fifth note above that,the next octave up, the third note beyond that, the next fifth and seventh notes.So if we called the bottom note D, then the ascending order of notes in theharmonic series are D, Dl, Al, D2, F Sharp 2, A2 and C Natural 2.. - iD D A D F# A CIt is not really possible to separate these sounds without electronic equipment,well not on the pipes. To hear them easily get a friendly flute player to blow lowD, then without changing his fingering get him, or her, to blow progressivelyhigher notes. A good flute player should be able to play and isolate each ofthese upper harmonics. These upper sounds, though we do not directly registerthem, are all present in the flute players bottom D, the relative strengths ofthem make up what we hear as the tone, sharpness or smoothness, and help usto determine what instrument is playing, as they appear with varying degree indifferent types of instrument. As the flute player is blowing these notes theycould all be measured for exact pitch, this would normally be shown today asdeviation from an equally-tempered scale. So our harmonics might be flatter orsharper than a standard note as used in an orchestra. For measuring purposesthe octave has been divided into 1200 parts, called cents. There are 100 centsin a tempered chromatic semitone. So, coming back to the flute player, weshould be able to note that, whereas all the notes of D that he produces shouldbe closely similar in pitch, the F Sharp and C notes will be flatter than themodern tempered scale equivalents. It would take a while to explain why this is,so let us just understand that these notes obey a natural law of perfectproportion, whereas the tempered scale has been modified for modernconvenience.How do we apply all this to the pipes and what use is it to us? Take firstlythe note F Sharp in the low octave of the chanter. If you play it and tune justthe tenor drone to it, adjusting the drone carefully until you are satisfied thatyou have the most homogenous chord, you should have tuned a perfect third. Ifyou then measured each of these pitches without disturbing them the gapbetween should equal 386 cents. An equally-tempered third has a spacebetween the two notes of 400 cents, so when the drone is concert pitch D the FSharp would be 14 cents flat. In other words, if a banjo player tuned his Dstring to concert pitch D then fretted his F Sharp position, his F Sharp would be14% sharper than the one we have just used. If the piper uses the same F Sharpas the banjo it lacks much sweetness when played against the drone. This isbecause it is slightly out of tune. We can go through all the notes of the naturalscale on the chanter and, in this way, find out where they should be toharmonise sweetly to the drone. There are difficult notes to try this with but itis not hard to tune the drone to F Sharp, G, A, B and C Natural. The resultshould be that whilst the G and A are not much different to the tempered scalethe B will be about as flat as the F Sharp is. and the C Natural is 25 - 30 centsflatter. This note, the flat seventh, is very characteristic of uilleann piping and iswhere the C Natural tunes in perfectly with the seventh harmonic coming off thebass drone, which is at the same pitch two octaves and seven notes up from thatbass drone note. These notes are the simple, pure, intervals on which theframework for tuning the pipes can be based.When we play on the pipes we do not so much play in keys like D or G or Eminor etc., but in what is called modal form, using the drone as a reference note.Modes, and we can say that basically there are seven, relate to the use of onescale of notes but derive their difference by the note in that scale that feels to bethe home note of a tune. So a tune may well feel complete when you come torest on Do, Re Me, Fa, So, La or Te. We do not use all of these modes, (seeBreandn Breathnach Folk Music and Dances of Ireland pp. 8,9). To appreciatethe different effects of these modes I refer you to a simple example; Return fromFingal, which is recorded by Samus Ennis starting on the note High E, and byFrancis McPeake starting on the note Low B. The note spacings are the same,but because the drone is in both instances the same the feeling is different. Theancient Greeks attributed degrees of emotion to these different modes. Bothversions of Return from Fingal show sadness, but the McPeake setting is
issue Number
1
page Number
6
periodical Author
[Various]
issue Publication Date
1993-01-01T00:00:00
allowedRoles
anonymous,guest,friend,member