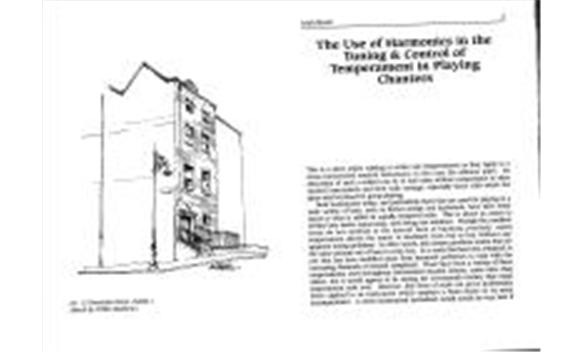 Previous | Next
Ceol na hÉireann / Irish Music, Volume 1, Issue 1, Page 5
7 views
Favourite | Share | Feedback
periodical Publisher
Na Píobairí Uilleann
periodical Editor
Chairman, NPU
periodical Title
Ceol na hÉireann / Irish Music
volume Number
1
issue Content
No. 15 Henrietta Street, Dublin 1.Sketch by Willie Matthews.Irish MusicThe Use of Harmonics in theTuning & Control ofTemperament in PlayingChantersThis is a short article relating to scales and temperaments as they apply to adrone_harmOflised musical instrument, in this case the ullleann pipes. Nodiscussion of such a subject can be of real value without comparisons to othermusical instruments and their scale tunings, especially those with which thepipes may be joined for group playing.Most instruments today, and particularly those that are used for playing in awide variety of keys, such as fretted strings and keyboards, have their notestuned to what is called an equally-tempered scale. This is where an octave isdivided into twelve equal steps, each being one semitone. Though the resultantnotes do not conform to the natural laws of harmony precisely, equaltemperament allows the music to modulate from key to key without anyapparent tuning problems. In other words, this system produces scales that arethe same amount out of tune in every key. So a scale that has been tempered isone that has been modified away from harmonic perfection to cope with theincreasing demands of musical complexity. There have been a variety of thesetemperaments tried throughout documented musical history, some nicer thanothers, but it would appear to be during the seventeenth century that equaltemperament took over. However, this form of scale can prove problematicwhen applied to an instrument which employs a fixed drone as its mainaccompaniment. A drone-harmofliSed instrument would sound its very best if
issue Number
1
page Number
5
periodical Author
[Various]
issue Publication Date
1993-01-01T00:00:00
allowedRoles
anonymous,guest,friend,member