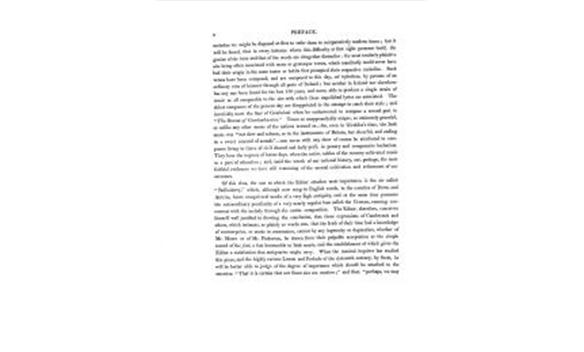 Previous | Next
Bunting - The Ancient Music of Ireland, Volume 1, Issue 1, Page 14
41 views
Favourite | Share | Feedback
periodical Publisher
Hodges & Smith, Dublin, 1840
periodical Editor
Edward Bunting
periodical Title
Bunting - The Ancient Music of Ireland
volume Number
1
issue Content
8 PREFACE.melodies we might be disposed at first to refer them to comparatively modern times ; but itwill be found, that in every instance where this difficulty at first s ht presents itself, thegenius of the tune and that of the words are altogether dissimilar: the most tenderly plaintiveairs being often associated with mean or grotesque verses, which manifestly could never havehad their origin in the same tastes or habits that prompted their respective melodies. Suchverses have been composed, and are composed to this day, ad infinitum, by persons of anordinary vein of humour through all parts of Ireland ; but neither in Ireland nor elsewherel1aS any one been found for the last 150 years, and more, able to produce a single strain ofmusic at all comparable to the airs with which these unpolished lyrics are associated. Theablest composers of the present day are disappointed in the attempt to catch their style; andmvarial)ly meet the fate of Geminiani when he endeavoured to compose a second part toThe Broom qf Uowdenknoiees. Tunes so unapproachably unique, so eminently gr acef.ul ,so unlike any other music of the nations around usfor, even in Giralduss time, the Irishmusic was not slow and solemn, as in the instruments of Britain, but cheerful, and endingin a sweet concord of soundscan never with any shew of reason be attributed to com-posers living in times of civil discord and daily peril, in penury and comparative barbarism.They l)ear the impress of better days, when the native nobles of the country cultivated musicas a part of education ; and, amid the wreck of our national history, are, perhaps, the mostfaithful evidences we have still remaining of the mental cultivation and refinement of ourancestors.Of this class, the one to which the Editor attaches most importance, is the air calledBallinderry, which, although now sung to English words, in the counties of Down andAntriin, bears unequivocal marks of a very fligh antiquity, and at the same time possessesthe ext aordinary peculiarity of a very nearly regular bass called the Oronan, running con-current with the melody through the entire composition. The Editor, therefore, conceiveshimself well justified in drawing the conclusion, that those expressions of Cambrensis andothers, which intimate, as plainly as words can, that the Irish of their time had a knowledgeof counterpoint, or music in consonance, cannot by any ingenuity or dogmatism, whether ofMr. Moore or of Mr. Pinkerton, be drawn from their palpable acceptation as the simplerecord of the fact, a fact honourable to Irish music, and the establishment of which gives theEditor a satisfaction that antiquaries might envy. When the musical inquirer has studiedthis piece, and the highly curious Lesson and Prelude of the sixteenth century, by Scott, hewill be better able to judge of the degree of importance which should be attached to theassertion That it is certain that our finest airs are modern; and that, perhaps, w may
issue Number
1
page Number
14
periodical Author
Edward Bunting
issue Publication Date
1840-01-01T00:00:00
allowedRoles
anonymous,guest,friend,member