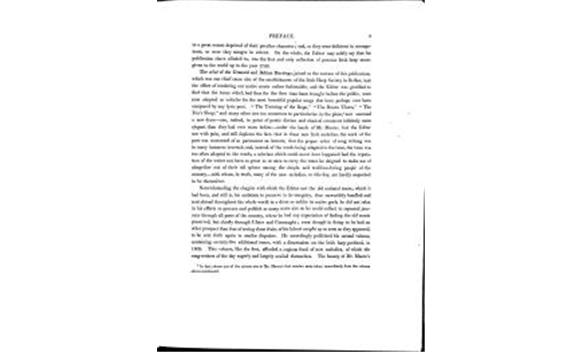 Previous | Next
Bunting - The Ancient Music of Ireland, Volume 1, Issue 1, Page 11
38 views
Favourite | Share | Feedback
periodical Publisher
Hodges & Smith, Dublin, 1840
periodical Editor
Edward Bunting
periodical Title
Bunting - The Ancient Music of Ireland
volume Number
1
issue Content
IPREFACE. 5to a great extent deprived of their peculiar character; and, as they were deficient in arrange-ment, so were they meagre in extent. On the whole, the Editor may safely say that hispublication above alluded to, was the first and oniy collection of genuine Irish harp musicgiven to the world up to the year 1796.The eclat of the Granard and Belfast Meetings, joined to the success of this publication,which was one chief cause also of the establishment of the Irish Harp Society in Belfast, hadthe effect of rendering our native music rather fasliioiiable, and the Editor was gratified tofind that the tunes which had thus for the first time been brought before the public, weresoon adopted as vehicles for the most beautiful popular songs that have perhaps ever beencomposed by any lyric poet. The Twisting of the Rope, The Brown Thorn, TheFoxs Sleep, and many other airs too numerous to particularize in this place,a now assumeda new dressone, indeed, in point of poetic diction and classical ornament infinitely moreejegant than they had ever worn beforeunder the hands of Mr. Moore; but the Editorsaw with pain, and still deplores the fact, that in these new Irish melodies, the work of thepoet was accounted of so paramount an interest, that the proper order of song writing wasin many instances inverted, and, instead of the words being adapted to the tune, the tune wastoo often adapted to the words, a solecism which could never have happened had the reputa-tion of the writer not been so great as at once to carry the tunes he deigned to make use ofaltogether out of their old sphere among the simple and tradition-loving people of thecountrywith whom, in truth, many of the new melodies, to this day, are hardly suspectedto be themselves.Notwithstanding the chagrin with which the Editor saw the old national music, which ithad been, and still is, his ambition to preserve in its integrity, thus unworthily handled andsent abroad throughout the whole world in a dress so unlike its native garb, lie did not relaxin his efforts to procure and publish as many more airs as he could collect in repeated jour-neys through all parts of the country, where he had any expectation of finding the old musicpreserved, but chiefly through Ulster and Connaught; even though iii doing so lie had noother prospect than that of seeing these fruits of his labour caught up as soon as they appeared,to be sent forth again in similar disguises. He accordingly published his second volume,containing seventy-five additional tunes, with a dissertation on the Irish harp prefixed, in1809. This volume, like the first, afforded a copious fund of new melodies, of which thesong-writers of the day eagerly and largely availed themselves. The beauty of Mr. Mooresa In fact, eleven out of the sixteen airs in Mr Moores first iiwher were taken immediately from the volumeabove-mentioned.
issue Number
1
page Number
11
periodical Author
Edward Bunting
issue Publication Date
1840-01-01T00:00:00
allowedRoles
anonymous,guest,friend,member