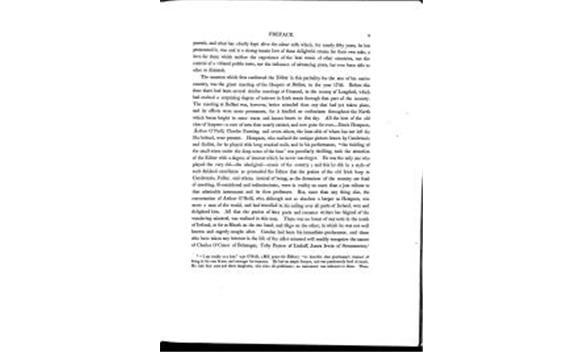 Previous | Next
Bunting - The Ancient Music of Ireland, Volume 1, Issue 1, Page 9
45 views
Favourite | Share | Feedback
periodical Publisher
Hodges & Smith, Dublin, 1840
periodical Editor
Edward Bunting
periodical Title
Bunting - The Ancient Music of Ireland
volume Number
1
issue Content
PREFACE. 3pursuit, and what has chiefly kept alive the adour with which, for nearly fifty years, he hasprosecuted it, was and is a strong innate love of these delightful strains for their own sake, alove for them which neither the experience of the best music of other countries, nor thecontrol of a vitiated public taste, nor the influence of advancing years, has ever been able toalter or diminish.The occasion which first confirmed the Editor in this partiality for the airs of his nativecountry, was the great meeting of the Harpers at Belfast, in the year 1792. Before thistime there had been several similar meetings at Granard, in the county of Longford, whichhad excited a surprising degree of interest in Irish music through that part of the country.The meeting at Belfast was, however, better attended than any that had yet taken place,and its effects were more permanent, for it kindled an enthusiasm throughout the Northwhich burns bright in some warm and honest hearts to this day. All the best of the oldclass of harpersa race of men then nearly extinct, and now gone for everDenis Hempson,Arthur ONeill, Charles Fanning, and seven others, the least able of whom has not left hislike behind, were present. Hempson, who realized the antique picture drawn by Cambrensisand Galilei, for he played with long crooked nails, and in his performance, the tinkling ofthe small wires under the deep notes of the bass was peculiarly thrilling, took the attentionof the Editor with a degree of interest which he never can forget. He was the only one whoplayed the very oldthe aboriginalmusic of the country; and this he did in a style ofsuch finished excellence as persuaded the Editor that the praises of the old Irish harp inCambrensis, Fuller, and others, instead of being, as the detractors of the country are fondof asserting, ill-considered and indiscriminate, were in reality no more than a just tribute tothat admirable instrument and its then professors. But, more than any thing else, theconversation of Arthur ONeill, who, although not so absolute a harper as Hempson, wasmore a man of the world, and had travelled in his calling over all parts of Ireland, won anddelighted him. All that the genius of later poets and romance writers has feigned of thewandering minstrel, was realized in this man. There was no house of any note in the northof Ireland, as far as Meath on the one hand, and Sligo on the other, in which he was not wellknown and eagerly sought after. Carolan had been his immediate predecessor, and thosewho have taken any interest in the life of the elder minstrel will readily recognize the namesof Charles OConor of Belanagar, Toby Peyton of LisdufF, James Irwin of Streamstown,aa i am totally at a loss, says ONeill, (MS. penes the Editor,) to describe that gentlemans manner ofliving at his own house, and amongst his tenantry. He had an ample fortune, and was passionately fond of music.He had four sons and three daughters, who were all proficients; no instrument was unknown to them. There
issue Number
1
page Number
9
periodical Author
Edward Bunting
issue Publication Date
1840-01-01T00:00:00
allowedRoles
anonymous,guest,friend,member