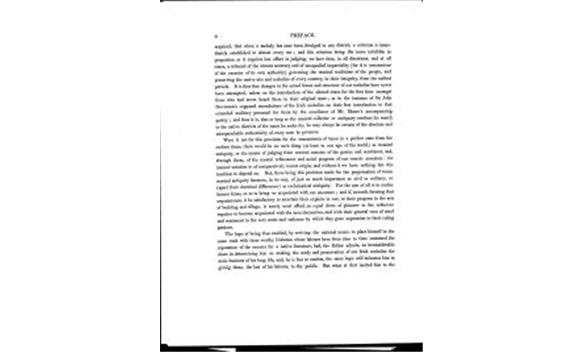 Previous | Next
Bunting - The Ancient Music of Ireland, Volume 1, Issue 1, Page 8
45 views
Favourite | Share | Feedback
periodical Publisher
Hodges & Smith, Dublin, 1840
periodical Editor
Edward Bunting
periodical Title
Bunting - The Ancient Music of Ireland
volume Number
1
issue Content
2 PREFACE.acquired, that when a melody has once been divulged in any district, a criterion is imme-diately established in almost every ear ; and this criterion being the more infallible inproportion as it requires less effort in judging, we have thus, in all directions, and at alltimes, a tribunal of the utmost accuracy and of unequalled impartiality (for it is unconsciousof the exercise of its own authority) governing the musical traditions of the people, andpreserving the native airs and melodies of every country, in their integrity, from the earliestperiods. It is thus that changes in the actual frame and structure of our melodies have neverbeen attempted, unless on the introduction of the altered tunes for the first time amongstthose who had never heard them in their original state; as in the instance of Sir JohnStevensons supposed emendations of the Irish melodies on their first introduction to thatextended auditory procurcd for them by the excellence of Mr. Moores accompanyinpoetry ; and thus it is, that so long as the musical collector or antiquary confines his searchto the native districts of the tunes he seeks for, he may always be certain of the absolute andunimpeachable authenticity of every note he procures.Were it not for this provision for the transmission of tunes in a perfect state from theearliest times, there would be no such thing (at least in our age of the world) as musicalantiquity, or the means of judging from musical remains of the genius and sentiment, and,through them, of the mental refinement and social progress of our remote ancestors : formusical notation is of comparatively recent origin, and without it we have nothing but thistradition to depend on. But, there being this provision made for the perpetuation of tunes,musical antiquity becomes, in its way, of just as much importance as civil or military, or(apart from doctrinal differences) as ecclesiastical antiquity. For the aim of all is to realizeformer times, so as to bring us acquainted with our ancestors; and if, towards forming thatacquaintance, it be satisfactory to ascertain their exploits in war, or their progress in the artsof building and tillage, it surely must afford an equal share of pleasure to the reflectiveinquirer to become acquainted with the men themselves, and with their general turn of mindand sentiment in the very notes and cadences by which they gave expression to their rulingpassions.The hope of being thus enabled, by reviving the national music, to place himself in thesame rank with those worthy Irishmen whose labours have from time to time sustained thereputation of the country for a native literature, had, the Editor admits, no inconsiderableshare in determining him on making the study and preservation of our Irish melodies themain business of his long life, and, he is free to confess, the same hope still animates him ingivilig these, the last of his labours, to the public. But what at first incited him to the-.
issue Number
1
page Number
8
periodical Author
Edward Bunting
issue Publication Date
1840-01-01T00:00:00
allowedRoles
anonymous,guest,friend,member