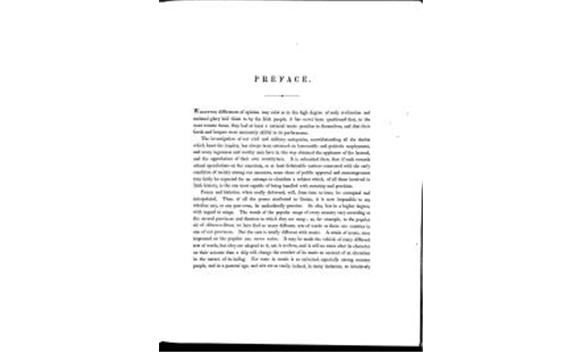 Previous | Next
Bunting - The Ancient Music of Ireland, Volume 1, Issue 1, Page 7
46 views
Favourite | Share | Feedback
periodical Publisher
Hodges & Smith, Dublin, 1840
periodical Editor
Edward Bunting
periodical Title
Bunting - The Ancient Music of Ireland
volume Number
1
issue Content
IPREFACE.WHATEVER differences of opinion may exist as to the high degree of early civilization andnational glory laid claim to by the Irish people, it has never been questioned that, in themost remote times, they had at least a national music peculiar to themselves, and that theirbards and harpers were eminently skilful in its performance.The investigation of our civil and military antiquities, notwithstanding all the doubtswhich beset the inquiry, has always been esteemed an honourable and patriotic employment,and many ingenious and worthy men have in this way obtained the applauses of the learned,and the approbation of their own countrymen. It is submitted then, that if such rewardsattend speculations on the uncertain, or at least debateable matters connected with the earlycondition of society among our ancestors, some share of public approval and encouragementmay fairly be expected for an attempt to elucidate a subject which, of all those involved iiiIrish history, is the one most capable of being handled with certainty and precision.Poems and histories, when orally delivered, will, from time to time, be corrupted andinterpolated. Thus, of all the poems attributed to Ossian, it is now impossible to saywhether any, or any part even, be undoubtedly genuine. So also, but in a higher degree,with regard to songs. The words of the popular songs of every country vary according tothe several provinces and districts in which they are sung : as, for example, to the popularair of Aiieen-a-Roon, we here find as many cliff rent sets of words as there are counties inone of our provinces. But the case is totally different with music. A strain of music, onceimpressed on the popular ear, never varies. It may be made the vehicle of many differentsets of words, but they are adapted to it, not it to them, and it will no more alter its characteron their account than a ship will change the number of its masts an account of an alterationin the nature of its lading. For taste in music is so universal, especially among countrypeople, and in a pastoral age, and airs are so easily, indeed, in many instances, so intuitively
issue Number
1
page Number
7
periodical Author
Edward Bunting
issue Publication Date
1840-01-01T00:00:00
allowedRoles
anonymous,guest,friend,member