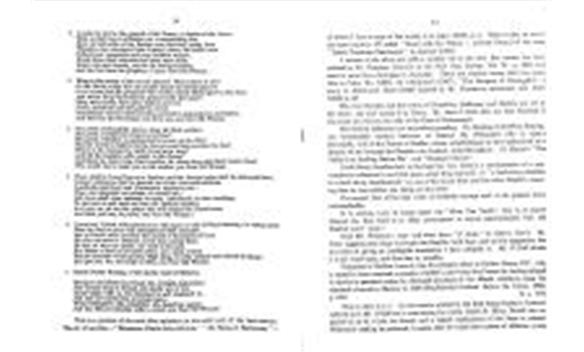 Previous | Next
Journal of the Irish Folk Song Society, Volume 4, Issue 20, Page 6
12 views
Favourite | Share | Feedback
periodical Publisher
Irish Folk Song Society
periodical Editor
[Periodical]
periodical Title
Journal of the Irish Folk Song Society
volume Number
4
issue Content
10112 I swear to you by the summit of the Dowse, ye fairies of the Laune,That ye shall see no affliction nor overmastering fear. -Ever on both sides of the Bandon was that deed surely doneWhereby were chastened false Luthers stout, fat-bodied crew.Collect your compadies and your faultless women,Knock down their churches and their stone folds;Drink wine and brandy, eat the fat beef yourselves,And hurl at them the prophecy of your Poor Old Woman.3 What is the reason of the second church? Was it there of old?Or did Christ ordain that ocr people should be tribute-payers?Or is it true that the promises were written which Moses gave to the Jews,And whicb King David timidly placed under the stone?They were merely false spies,- faction and evil,Verily Antichrist and this gallows crowd.Treacherous scholars deceived them and did it destructively and falsely,And will take the November rent from you, my Poor Old Woman.4 The priest of Clonakilty wears a long, jet-black soutane,The priest of Ballineens heart is tortured;The priest of Mallow is saying that he swore on the Bib!eThat he would be faithful to the Government that provides the food.Where is the vineyard in which Israel grew hops?And did the martyrs suffer naked in the flames?And there are many long, black reptiles, for whom they shed their heart s blood,Who would like to roast you on the cinders, you Poor Old Woman.5 There shall be Long Dances in London, and the foreign bucks shall be destroyed there,Luthers followers shall be hunted out of the innermost thickets.Landlords shall bowl and (Protestant) ministers roarThey who despoiled our priests, oh woeful tale!But these shall come amongst us again, unhindered, to their dwellings,To instruct us and teach us from our faultless authors,And may we yet see the prince who will cleanse the Court-house,And then you may be joyful, you Poor Old Woman I6 It was not, I think, with splendour or with liquor or with Fridays feasting, (i.e. eating meat)That the God of glory duly strengthened His character,But as Daniel came out from the mouth of thousands of lions,He who was sent to Babylon, in his tent, among them.He had no wine nor porter, nor roast in his sack,Nor dishes of food on his table there, nor a joint of beef,But the miracles of the glorious High King, it is He created and ordered all things:And put you, too, your hope in Him, you Poor Old Woman.7 Search Doctor Keating, of the sturdy blood of Milesius,Heremon and Heber and Conal who wrought destruction,And Cormac king of -Ireland, the stordy son of Art.James began with us, who betrayed us and weakened us,And sold our Gaelic shoe to twisty bears;Twas ORourkes wife, unfaithful, who hated her spouse.And who left you desolate under a cloud, you Poor Old Woman IThis is a product of the anti-tithe agitation in the early part of the last century.The air of another R4iseanna Bhaile Atha hUbhla, the Races of Ballyhooly of which I have a COPY of the words, is in ,Toyce (1909), p. 3. There is also an air inthe same book (p. 17) called Down with the Tithes and see Verse 2 of the songDaisle Triucha is Chdrthainn in Journal XVIII.A version of the above air, with a similar set of the first five verses, hen beenprfnted by Mr. Freeman (,iournal of the Folk Song Society, Vol. VI., p. 186), hutmine is more like a hornpipe in character. There ai-e distinct tunes with the sametitle in Peti-ie (No. 1200), An Ghldii-seach (1907), Th e Rangers of Connaught, astoi-y in Edinbnrgh Tales (1845) (quoted at Mr. Freemans reference), and ,Joycc(1909) p. 60.The river Bandon and the towns of Clonakilty, Ballineen and Mallow are all inCo. Cork ;.tlie river Laune is in Kerry; Mr. Sedn 6 Cuill tells me that Dainhas isthe name of a bill on one side of the Pass of Keimaneigh.The biblical references are somewhat puzzling. Dr. Keating is Geoffrey Keating,the seventeenth century historian of Ireland. By ORourkes wife is meantDevorgilla, wifo of the Prince of Breffni, whose unfaithfulness to her husband led to adispute which brought the English into Ireland, under Strongbow. Cf. Moores TheValley Lay Smiling Before Mo and Eveleens Bower.Leath-bhrOg Gceedheaiach, in the last line but three is a reminiscence of a con-temptuous reference in an Irish poem about King .James II. to a leath-bhrog Galldliuis a tenth bhrOg Gaedhealach, i.e. one of his shoes Irish and the other English, mean-ing that he was neither one thing nor the other.The second line of the last verse is evidently corrupt and, in its present form,untranslatable.-It is curious how, in songs about the Shan Van Vocht, who is of courseIreland, the first word is so often pronounced to rhyme approximately with theEnglish word noun.Both Mr. Freemans copy and mine have fi chops in verse 4, line 5. Mr.Foley suggests that chops is simply the English word hops, and as this suggestion hasthe merit of giving an intelligible translation I have adopted it. Mr. 6 Cuill thinksit is the word copse, and that also is possible.The priest of Mallow (verse 4, line 3) probably refers to Father Barry, P.P., who- is stated to have received a pension of 100 a year from the Crown for having refusedto absolve a penitent unless he disclosed the plans of the Meath militia to raise thestandard of revolt in Mallow in 1798 (FitzPatricks Ireland Before the Union, 1867,p. 218). D. .. 0S.Verse 3, lines 3, 4, 7. In the version printed in the Folk Song Societys ,Tournal,referred to in Mr. OSullivans note above, the words Ddith Ri (King David) are re-placed by an dd ri (the two kings), and a legend explanatory of the lines is related.Whichever reading be preferred, it seems that we have hero a piece of folklorea use
issue Number
20
page Number
6
periodical Author
[Periodical]
issue Publication Date
1967-01-01T00:00:00
allowedRoles
anonymous,guest,friend,member